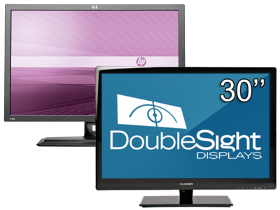 Very few of us can claim that we have enough desktop real estate. If you say you do, you haven't spent enough time tinkering around on just one more monitor.

Now that LCD panels are commodities (and not luxuries), enthusiasts enjoy filling their desktops with either multiple displays or a single large one. Twenty-seven-inch panels are great, especially with the high pixel density afforded by QHD (2560x1440). But we continue to lament the near-demise of 16:10 panels. That extra bit of height makes it so much easier to put two documents or two browser windows side by side. In fact, the jumbo monitors we're looking at today sport 33 percent more screen area than a 27-inch 16:9 panel (404 square inches versus 311).

If you’re willing to lay down $1100-1200, HP and DoubleSight both have massive 30-inch 16:10 monitors for your desktop. Sporting resolutions of 2560x1600, they offer pixel density nearly equivalent to a 27-inch QHD screen. Even at a viewing distance of less than three feet, you won’t see the dot structure unless you have very sharp eyes. And since everything becomes smaller, you get more room for multiple windows on your desktop. Plus, with a panel this big, one is probably all you’ll need. Making room for two or three certainly wouldn't be easy.

Just like its smaller brother that we reviewed in HP ZR2740w Versus Asus PB278Q: QHD 27" Monitors, Tested, HP's ZR30w comes in an enormous box that protects its contents from all but the most vicious handling. The panel and stand are fully encased in dense Styrofoam. DVI and DisplayPort cables are included, along with a standard power cord for the internal power supply. Also in the box is a CD with the user manual and drivers.

The base is a heavy metal frame covered in high-quality plastic. Its footprint is fairly small and only extends forward of the panel by two inches. At the rear, it takes up another eight inches and totals 17 inches in width. HP did a very good job designing a base that is extremely solid and stable without eating up too much of your desk. Ergonomic adjustments include height, tilt, and swivel. The panel does not rotate to portrait mode, though. If you want to use your own bracket, you can remove the factory hardware and use the panel’s 100 mm VESA mount.

The bezel is near-black in color and completely light-absorbing. Width is a uniform 24 mm on all sides. On the lower-right side of the bottom bezel lies the power button, a key to change input sources, and two controls for raising and lowering the brightness. There is no on-screen menu, and therefore no other adjustments available. The buttons have a nice high-end feel, and the entire panel seems solidly built. The screen itself has a very aggressive anti-glare coating. While it completely eliminates reflections, its texture is so deep that we see a subtle sparkle effect on the screen. This phenomenon is visible in smooth-toned images like those of sky or water. Expanses of solid color or subtly-shaded content seem to show it the most. We don’t consider that a deal-breaker by any stretch, but it might bother the super-picky user. At nearly 3.5 inches thick, this monitor won’t make a fashion statement, but the simple industrial styling is understated and should blend well into any office environment. Of course, its sheer size will stand out, and if you have one on your desk we expect that your co-workers will want one too.

Inputs are all-digital and face downwards. Only DVI and DisplayPort are included, so no VGA or HDMI ports are present. For peripherals, there is a USB-B upstream connector and four standard USB-A ports. Two are on the input panel and the other two are on the left side of the bezel. They are all USB 2.0-compatible. There is no provision for audio, either through analog jacks or via DisplayPort.

Like HP's ZR2740w, the ZR30w utilizes an H-IPS panel from LG. The big differences here are the CCFL backlight and the 16:10 aspect ratio, making the resolution 2560x1600 instead of 2560x1440. This is a serious amount of screen area. Because of the extra size, pixel density is slightly lower (100 pixels per inch instead of 108). At normal working distance, even those with sharp eyes won’t notice the difference. Once you’ve had a screen this large in front of you, it’s hard to go back.

The DS-309W is also packaged very securely in a double-corrugated box. Rather than the suitcase-style carton most monitors come in, DoubleSight lays the panel flat and surrounds it with soft rubbery foam that doesn’t crumble or break easily. Unfortunately, the bundled cables are a bit sparse, with only DVI, VGA, and a stereo audio cable to drive the internal speakers. The power supply is a large external brick. In fact, it’s one of the largest we’ve seen. But its rubber feet are a nice touch that won’t mar your desktop. Rounding out the accessory kit is a CD with drivers and a PDF user manual.

The most attractive part of the DS-309W is its base, which is a quarter-inch thick glass plate. It’s quite substantial, keeping the monitor balanced well on four large rubber feet. The rest of the attachment hardware is less impressive. There is no height or tilt adjustment; just swivel. Luckily, the screen sits just high enough to work on the typical desktop. If you want to use a custom bracket or swing-arm, there are two sets of threaded VESA-compatible fittings around back at 100 and 300 millimeters.

The bezel is made of a soft plastic that is prone to scratching. It’s finished in a gloss black and measures 23 mm at the top and sides, and 44 mm on the bottom. The controls are in the usual lower-right location, and are activated by downward-facing buttons. They feel cheap and require enough effort that the panel wobbles as you operate them. We also found them a bit confusing at first. The menu and source keys are easy to understand. However, there is no select key, only up/down arrows and plus/minus. It turns out that plus doubles as the select button. We also discovered the source inputs do not auto-sense. You have to choose them manually. Style-wise, this monitor reminds us a little of the value-based Auria EQ276W with its rounded corners and chassis free of angles or bevels. The screen itself has a superb anti-glare coating that cuts reflections completely, all without introducing any graininess to the image.

You get a complete set of inputs from the DS-309W, with one each of VGA, HDMI, DVI, and DisplayPort. There is also an analog audio input and a headphone output. Both are one-eighth-inch jacks. The speakers will also pass an audio signal from the monitor’s HDMI input. Volume can be controlled both in the OSD, or using the plus and minus keys on the bezel. There are no USB ports included. All of the input jacks face downward in a recessed portion of the panel’s backside. This makes cables with large connectors, like DVI, a tight fit. It’s best to lay the screen down and make the necessary connections in advance, before placing the monitor on your desk.

This display also uses an H-IPS panel from LG Display. Like the HP, the backlight is CCFL and the aspect ratio is 16:10 with a native resolution of 2560x1600.

From a specifications standpoint, these 30” panels are very similar, though the DoubleSight sells for around $180 less than the HP.

Next Page Measurement And Calibration Methodology: How We Test
19 Comments Comment from the forums