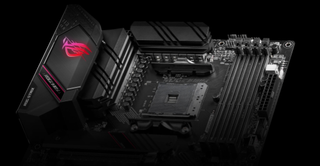 Whether you’re building a new PC from the ground up or looking for a new place to house your processor and other components while making a few upgrades along the way, your choice of motherboard is a key consideration. And right now, new motherboards with the B550 chipset are offering some of the best capabilities at a price that’s easy to stomach.

The most capable motherboards don’t tend to come cheap, often costing as much as even a high-end CPU. So, if you’re looking to put together a PC that’s affordable, not all motherboards are going to fit the bill. While AMD’s Ryzen 3000-series processors offer incredible value, the only way to get the most out of them has been with expensive X570 motherboards. The B550 chipset is changing that.

The new B550 chipset doesn’t just natively support Ryzen 3000-series processors, but it will also offer support in the future for the next generation of Ryzen processors, giving you a clear upgrade path. Motherboards using this chipset bring USB 3.2 Gen 2 connectivity for 10Gb/s transfer speeds. That’s a doubling over what was available on B450 motherboards using USB 3.1 Gen 1 ports. And, these new motherboards support one of the greatest features of the latest generation of AMD processors: PCIe 4.0.

PCIe 4.0 doubles the bandwidth of PCIe 3.0, giving you immense throughput for add-in components. With the B550 motherboards, you’ll get a PCIe 4.0 x16 slot with a max bandwidth of about 64GB/s (or two x8 slots) you can use for a graphics card as well as a x4 slot you can use to support the fastest PCIe NVMe SSDs on the market with about 16GB/s of bandwidth.

You should find those features on every B550 motherboard, but extra capabilities come down to the motherboard manufacturer, and ASUS has a suite of new B550 motherboards ready for everything from gaming, creative workloads, and just general high-performance needs.

ASUS’s new motherboards come in its ROG Strix Series, TUF Gaming Series, and Prime Series. The Prime Series offers the most affordable entry point into ASUS’s B550 motherboards, while ROG Strix and TUF motherboards offer a high-end take on the B550 chipset and add in some advanced features.

All of ASUS’s B550 motherboards include heatsinks on the VRMs and chipset, ensuring system stability. The ROG Strix and TUF models go even further by adding heatsinks for M.2 drives, protecting your storage from extreme temperatures. They also improve the power delivery, using 8+2 power stages on the TUF models and up to 14+2 power stages on the ROG Strix models, ensuring your CPU doesn’t just go fast but also maintains that speed. Many of the ASUS B550 motherboards also support multi-GPU setups.

There are plenty of other handy features on deck as well. BIOS Flashback gives PC builders an easy way to update the BIOS without needing to have a CPU or RAM installed. AI Mic offers gamers and streamers a way to cut down on background noise so their friends and audience only hear their voice. And, all of ASUS’s B550 boards have speed in mind with support for CPU and RAM overclocking. RAM overclocking on current Ryzen CPUs can hit up to 4,600MHz on all ASUS B550 motherboards, well beyond what you’ll find on most B450 motherboards, and it will go even higher still for next-gen Ryzen processors, allowing for up to 5,100MHz RAM speeds.

ASUS won’t leave out PC builders who are on a quest for a stylish rig. The whole line of ASUS B550 motherboards include support for Aura Sync and feature ARGB and RGB headers for controlling RGB-lit peripherals.

With all there is on offer from ASUS B550 motherboards, there’s little reason to go with an outdated B450 motherboard or an expensive X570 motherboard.

Learn all about ASUS B550 motherboards here.