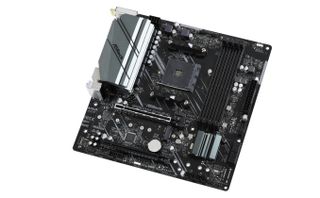 Update 02/14/2020: Clarified that this motherboard has been available in OEM systems for several quarters.

Courtesy of hardware leaker KOMACHI_ENSAKA, we've got images and documentation for one of ASRock's OEM Micro-ATX motherboards that has been used in OEM systems for several quarters: the B550AM Gaming.

It must be noted that while the new upcoming chipset might be called B550, this particular motherboard looks to be a B550A board, which are OEM boards as confirmed by AMD in October last year. In fact, this is the same motherboard as was spotted in October.

Where things get a little confusing is that at that time, the B550A chipset was said by AMD's Robert Hallock to be a rehash of the B450 chipsets but for OEMs, only featuring PCI-Express 3.0. The specifications we found now, however, point to the motherboard having PCI-Express 4.0 for the first PCIe slot, provided the chip supports it. Therefore, it's possible there may be only one B550 chipset, and that the "B550A is for OEMs" argument was meant to throw the community off.

PCI-Express 4.0 was rumored, but not certain, to arrive on the B-series platform. The PCI-Express 4.0 support isn't quite as extensive as on the X570 motherboards, though it's unlikely to affect customers interested in these boards.

Whereas the X570 motherboards have PCI-Express switching that brings PCI-Express 4.0 lanes to all the PCI-E slots, and can split them across multiple slots if necessary, the B550AM Gaming from ASRock only delivers PCI-Express 4.0 support on the uppermost slot and to the M.2 slot. The second PCI-Express slot might look like an x16 slot, but on this Micro-ATX motherboard will only fuel four lanes of PCI-Express 3.0 via the chipset. Most people don't use more than one graphics card, so chances are that these limitations won't affect many. Those who do need more options can opt for the X570 or better motherboards.

Aside from the PCI-Express support, the other thing that stands out is the VRM implementation. On B350 motherboards, VRM implementations are known to leave users wanting. Some of the B450 models bumped the VRM designs up a bit, but most still weren't great. However, this ASRock B550AM Gaming motherboard is packed with a whopping 10 VRM phases using ASRock's Digi power design, and there is also a hefty heatsink on them for cooling. That's a level of VRM circuitry that we've only seen on the higher-end X-series chipsets in recent year.

This is good news for buyers looking to build a new system and don't need the full plethora of connectivity and expansion offered by the X570 motherboards, but who do want a motherboard with good VRM circuitry. Paired with PCI-Express 4.0 support with the right CPUs installed, if we end up seeing more B550 boards in the DIY space with this kind of VRM implementations, we could see the mid-tier B-series chipset group gaining serious traction.