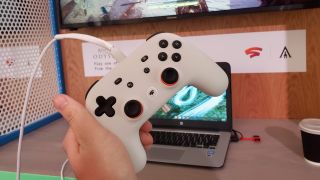 Game streaming isn’t a novel concept. Companies promised to let people enjoy games over the Internet years ago, but the execution was never good enough for them to find much success.

Despite this, in a recent interview with Edge magazine detailed by PCGamesN, Google vice president of engineering Madj Bakar said the company wants to change that with Stadia, and he believes that “within a year or two” the service will offer better performance than people would get if they were to play a game on local hardware.

Bakar reportedly said that Stadia will “have games that are running faster and feel more responsive in the cloud than they do locally ... regardless of how powerful the local machine is.” How? Well, via Google’s proprietary streaming technology, which he claimed has a “negative latency” feature that counteracts the lag inherent to cloud-based gaming.

Stadia will reportedly use a variety of techniques to achieve this. One way it’s supposed to counteract the natural delay between someone pressing a button in Philadelphia, for example, and having it reach a data center in New York is simply upping the game’s framerate. More frames means people have more opportunities to register an input -- that’s why many competitive gamers push their machines to hit as many frames per second (fps) as possible.

But that alone wouldn’t be enough to achieve “negative latency.” (And if you’re wondering, yes, we’ll continue to use scare quotes around the term throughout this piece.) Stadia will also use machine learning to predict what someone will do next in a game and then preemptively make that input. Assuming the service guesses correctly, the player will never realize that Stadia was basically playing the game for them just to make sure no lag-based funny business could occur.

We don’t have our tarot cards handy, so we can’t actually predict the future, but it’s hard not to be skeptical of Bakar’s claims. At E3 in June, we demoed Stadia, playing Doom Eternal. Even in that controlled environment, we experienced slight lag two or three times in our 30 minutes of play.

Will the company truly be able to solve those problems in just a couple years of Stadia’s existence? And even if it does, would that truly offer better performance than gaming on a custom-built PC?

It’s possible Stadia will be able to offer better performance than a local machine sometimes--there are so many variables at play. Perhaps in a perfectly stable environment with high-speed Internet that doesn’t have any packet loss and whose player always behaves exactly as Stadia expects the service will outperform its local counterpart. Ta-da!

But the reality is that many aspects of the Stadia experience will be outside Google’s control. Will the devices used to access the service rely on Wi-Fi or an Ethernet connection? Will those connections come via fiber optic networks, broadband, DSL or dial-up? (It’s no secret that the U.S. has terrible Internet infrastructure.) Will Internet service providers decide to throttle Stadia traffic, enforce strict data caps or otherwise interfere with the streaming platform’s data transfers?

There’s only so much Google can do to help Stadia perform as Bakar predicted. But the service has yet to launch (it’s expected to do so in November), and if its release is anything like other services, it’s bound to have a few problems. And now it has a whole lot to live up to. Until it delivers, “negative latency” stays in scare quotes.