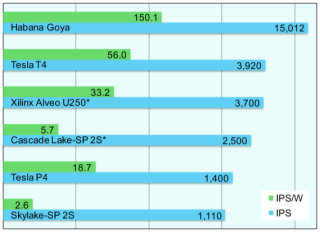 Intel has provided Forbes with some additional information about its decision to cease Nervana development in favor of Habana. According to statements by an Intel executive, Intel made the decision based on “customer input.”

Naveen Rao, general manager of Intel’s AI Platforms Groups, told Forbes that performance was not the driving factor behind the change. While Intel will cease development of the Nervana products, it will bring “future enhancements” from the architecture NNP architecture into Habana.

Last week, Intel disclosed that it would shift its roadmap for data center deep learning accelerators to Habana, the startup that Intel acquired in December. Advantages of the Habana line include an Ethernet-based fabric (ROCE) and, as Intel also acknowledged, a converged software suite and architecture that can be for both the Goya and Gaudi product lines.

Rao confirmed that both the NNP-I and NNP-T chips were optimized for their targeted use cases of inference and training, respectively, without regard for compatibility. This complicates the development of software that can run on both chips.

The Gaudi chip for training also should have a lower cost due to its lack of interposer with high-bandwidth memory (HBM). Gaudi circumvents these problems by utilizing what is called “model parallelism.” Also on the cost side, Gaudi's Ethernet fabric leverages an established ecosystem and the ROCE technology doesn’t require expensive NICs or top of rack switches. In contrast, Intel claimed that the Nervana NNP-T had a glueless fabric.

To sum up, while the Nervana chips had some promising features, a combination of customer feedback, cost issues and the goal of a converged architecture and software model seemed to have favored Habana.