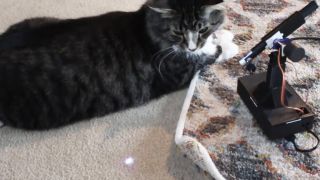 If you have a cat, you know what it's like when they decide it's time to play. This DIY Cat Laser Robot, shared by Benjamin of the TrionFilms YouTube channel, was designed specifically to include your feline friend! It uses a Raspberry Pi to move a laser light around the room for your cat, or any other interested pet, to chase.

In addition to boasting the Pi single-board computer, this robot uses a couple of servo motors to move its laser. The original prototype was completely automated with pre-programmed movements.

Benjamin designed and 3D printed a case for the final build. The servo motors are controlled with the help of a Python library. In the final iteration, Benjamin opted to control the laser manually with the arrow keys on a keyboard.

Unfortunately, the Python library doesn't provide any tools for recognizing the release of a key press. As a workaround, you have to press Enter to stop the laser from moving. This makes controlling the robot a bit trickier but leaves room for future modifications.

You can check out more projects and future updates by following Benjamin on the TrionFilms YouTube page.

Today's best Raspberry Pi 3 deals
105 Amazon customer reviews
☆☆☆☆☆
Raspberry Pi 3 Model B...
Tomtop WW
$48.99
View
We check over 130 million products every day for the best prices
No comments yet Comment from the forums
Be In the Know