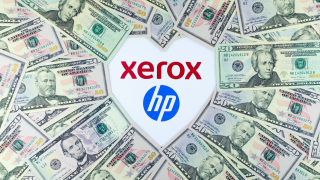 Xerox today announced that it's received $24 billion in financial commitments from Citigroup, Mizuho and Bank of America for its "value-creating combination with HP."

The announcement indicated that Xerox plans to move forward with the unsolicited offer it made HP in November 2019. That proposal would have given HP shareholders a mix of cash ($17) and Xerox shares (0.137) for a total of $22 per share. HP's shareholders also would have owned 48% of the combined business.

HP's board of directors unanimously rejected Xerox's offer in mid-November 2019. The company said its board decided that the offer "significantly undervalues HP and is not in the best interests of HP shareholders." HP also raised questions about Xerox's financial standing, given its declining revenues between June 2018 and 2019.

But that unanimous rejection doesn't appear to have dissuaded Xerox. The company said in today's announcement that its chief executive, John Visentin, sent another letter to HP's board of directors after securing the $24 billion in financial commitments from the companies listed above. That letter read in part:

"Dear Chip and Enrique, Over the last several weeks, we have engaged in constructive dialogue with many of your largest shareholders regarding the strategic benefits of our proposal to acquire HP. It remains clear to all of us that bringing our companies together would deliver substantial synergies and meaningfully enhanced cash flow that could, in turn, enable increased investments in innovation and greater returns to shareholders."

The full letter can be found in Xerox's announcement. HP hasn't yet responded to Xerox's latest missive, at least not publicly, but we'll update this post if it does. We predicted in November that HP's dismissal of Xerox's proposal wasn't the last time we'd hear about a potential merger; we suspect the same is true of this financing.