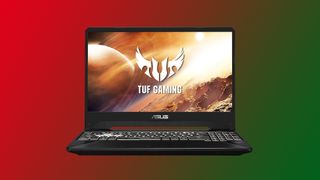 The TUF FX505DT weighs 4.85 pounds, and Asus advertises the keyboard as being MIL-STD 810G tested for durability. The chassis is plastic rather than metal. But given the price, that’s not surprising.

This budget-priced gamer also includes an RGB keyboard, 802.11AC Wi-Fi, and fairly slim bezels. In general, you won’t get quite as good CPU performance for productivity tasks as you would with a competing Intel processor, and battery life will likely be shorter. But in a gaming laptop that you’ll want to run plugged in most of the time, which you won’t likely be taxing with high-end productivity tasks on the regular, the Ryzen CPU in this laptop should more than suffice.