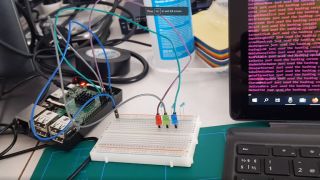 If you want to check Twitter, this Raspberry Pi-based bot is one way to do it. This project tracks specific hashtags in real-time, with LEDs lighting up when someone tweets the hashtag. The project comes from a Reddit user known as MrEdews.

Handy for social media fanatics, the project relies on an application called Tweepy to monitor Twitter for certain hashtags. Tweepy is a Python library designed to access Twitter's API. This makes it possible to read and respond to specific hashtags right as they're used.

Tweepy can handle sifting through tweets with multiple hashtags. MrEdews programmed his setup to keep checking until it found one of three hashtags: #quarantine, #corona and #covid19. He assigned a specific color LED to each hashtag. When the Raspberry Pi detects one of the hashtags, it illuminates the corresponding LED.

This is a fun Raspberry Pi project that should work with any model of the Raspberry Pi. If you'd like to see more, follow MrEdews on Reddit for a video demonstration of the Twitter bot and more cool Pi projects.

Today's best Raspberry Pi Foundation Raspberry Pi 3 deals
105 Amazon customer reviews
☆☆☆☆☆
Raspberry Pi 3 Model B...
Tomtop WW
$48.99
View
We check over 130 million products every day for the best prices
No comments yet Comment from the forums
Be In the Know