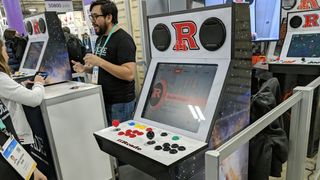 These days, it seems like everyone wants to play classic arcade games. And why not? There's nothing quite like the feeling of running around the Pac-Man board or pumping dragons until they explode in Dig Dug. So the market is flooded with retro arcade and console systems, but there are a lot of catches. Some cabinets can only play a handful of titles, and other systems require you to bring your own (illicitly downloaded) games. And many only support one platform.

Enter the iiRcade. Due out later this year for an undisclosed sum, the iiRcade is a full-sized arcade cabinet with an app store you can use to buy and download fully-licensed games from a variety of platforms, including current-day Android.

I got a chance to play with an iiRcade machine at the startup's CES 2020 booth and came away impressed with the build quality of the machine itself. The cabinet can be used either as a tabletop (aka cocktail) machine or placed onto an optional stand that makes it full-height for standup gaming.

The screen, available in 17 or 19-inch varieties, offered crystal clear images and colors when I played a game of Double Dragon, the first title that iiRcade has licensed. The dual arcade sticks felt really good and the buttons had a very satisfying clicky feel that's been absent from many build-at-home arcade kits I've tried.

Each joystick has six buttons, and then there's a top row for accessing the menu, adjusting the volume and selecting one- or two-player modes. Two speakers, which sounded very loud in my demo, live on either side of the iiRcade banner on the top front of the machine.

iiRcade CEO Jong Shin didn't disclose many specifics about the system's internal components. But he did share that it's an ARM-based computer that's not a Raspberry Pi and that it runs a highly customized version of Android that's been optimized for gaming.  He didn't disclose how much internal storage the machine has, but said that it has plenty of capacity for holding the types of games users will install.

Shin said that, because the iiRcade arcade machine is built on top of Android, it can run Android games that have been modified to play with its retro joysticks and buttons. So, you can play a modern, Android-based first-person shooter and use one old-school joystick to move and the other to look around, something you could never do in the eighties. Shin said that any Android games he licenses will be specially modified to work with the iiRcade's controls rather than a touch screen.

When iiRcade launches later this year, there will be a mobile app  that gamers will use to purchase games via their phones. The arcade machine will then use its own Internet connection to download and install the titles you've bought.

While the hardware seems really good, the success of the iiRcade could hinge not only on the machine itself, but on the array of licensed titles that will run on it. So far, Shin said he has licensed the Double Dragon series, but is still working to sign up other partners before launch.

There's no word yet on pricing for the iiRcade or a precise launch date, though consumers can sign up for updates on the iiRcade website. If iiRcade can get the product out at a reasonable price and license a critical mass of games, it could be a very compelling option for gamers who want to enjoy a mix of retro and modern titles on a classic-style arcade cabinet.