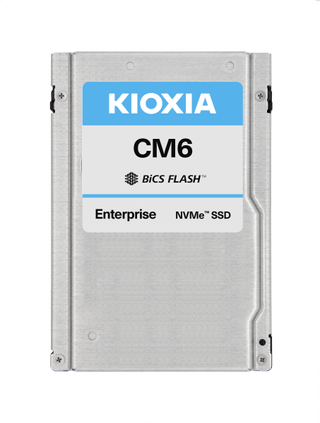 In a win for data centers and enterprises with PCIe 4.0 server platforms, like AMD's EPYC Rome lineup, Kioxia announced that it is sampling the industry's first PCIe 4.0 enterprise SSDs to key partners, with general availability slated for March, 2020. The new SSDs, which range up to 30TB, provide up to 6.9 GBps of throughput and can push out an amazing 1.4 million random IOPS apiece.

While AMD's EPYC Rome platform has a distinct connectivity advantage over Intel's platforms with support for PCIe 4.0, which provides twice the throughput of the PCIe 3.0 interface on Intel's platforms, the current crop of PCIe 4.0 SSDs are only designed for consumer use, meaning they don't support features critical in the enterprise, like power loss protection, dual-port functionality for redundancy, double-parity schemes that avoid data loss, or advanced encryption.

Kioxia, the company formerly known as Toshiba, corrects that issue with its new CD6 and CM6 SSDs, but they also bring astounding performance to the table. The CM6, which is designed for ultimate performance for the enterprise, wields an 18-channel SSD controller that pushes out up 1.4 million random read IOPS and 170,000 random write IOPS at the 30TB capacity point. As per usual, performance varies based upon capacity. Sequential throughput weighs in at an impressive 6.9/4 GBps of read/write throughput and the drive supports dual-port connectivity for redundancy, making it the only flash-based dual-port SSD on the market.

Meanwhile, Kioxia tailored the CD6 for data center customers that prize cost-optimized designs. The 16-channel controller peaks at 6.2/4 GBps of read/write throughput and 1 million/750,00 random read/write IOPS. The drive steps back to single-port functionality as a cost-optimizing measure.

As expected, the drives are almost ridiculously faster than PCIe 3.0 alternatives, and latency also sees a tremendous reduction, though that comes as the fruits of Kioxia's optimized proprietary SSD controllers and performant 96-layer BICS4 TLC flash rather than the PCIe 4.0 interface. Kioxia is almost entirely vertically integrated, so DRAM represents the only outsourced component on the drives. Both drives come in 1 DWPD (Drive Write Per Day) and 3 DWPD flavors.

The new drives are also the first to support the U.3 interface and NVMe 1.4 protocol. The U.3 interface is a small iterative update to the U.2 spec, so the connectors feature the same physical dimensions and are backward compatible. However, the U.3 port is compatible with tri-mode RAID and HBA adaptors that support SAS, SATA and PCIe drives. An unused sense pin in the connector is now active, allowing the SSD to communicate with 'smart' backplanes and configure the PCIe PHYs accordingly.

Kioxia's new drives are also the first to support the NVMe 1.4 protocol, which enables enhanced namespace, logging, write streaming, and sanitize features. The controllers have configurable power states of 25, 14, 11, and 10W to tailor them for various thermal profiles. Speaking of which, the drives are 15mm thick, as high-performance 7mm drives have lost favor due to thermal constraints in densely-packed servers.

Kioxia has worked closely with AMD during development (AMD does have the only PCIe 4.0-equipped x86 servers on the market), so the drives are ready to roll with AMD's EPYC Rome platforms along with support for all other PCIe-compliant servers, like Intel's 3.0-equipped lineup.