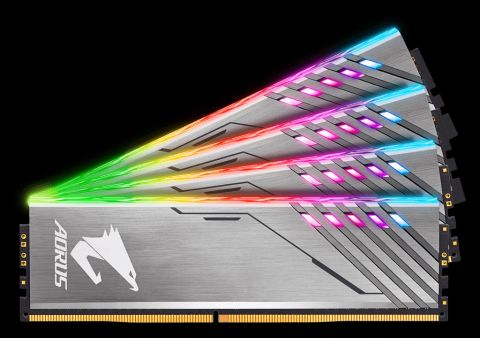 Gigabyte brings great looks to two-DIMM kits with light-up dummy modules of its Aorus RGB Memory, but this kit's performance is not up to par with its appearance, leading us to appeal for a price drop.

Gigabyte adds low-cost RGB LED demo modules or "dummy sticks" to its new Aorus RGB kit, allowing buyers to get in on the look of four-RGB DIMMs without paying for four 8GB modules. But while the appearance and components are there to make this a great kit, DIMM programming was less-than-optimal for our Z370 motherboard.

Four DIMMs look better than two, particularly when they pack RGB lights, and specifically when those lighted DIMMs are populating every available RAM slot. But current memory density (8Gb, or 1GB, per integrated circuit) has produced only 8GB and 16GB modules, leaving show system builders with unsatisfactory choices. To get four RGB DIMMs, you must either splurge for 32GB, or use overpriced modules based on outdated memory tech. Gigabyte’s novel approach is to produce a two-DIMM kit with two additional fake DIMMs it calls “Demo Modules.” While there's not any actually memory in these Demo Modules, all four sticks have the same lighting, so that your finished build looks fully decked out with RGB.

Covered in titanium-grey anodized aluminum heat spreaders, the difference between the actual memory and the demo modules can can be easily recognized by the missing pins and different labels of the demo parts. Installation conceals these differences.

Gigabyte lists the onboard integrated circuits (ICs) as Samsung B-Die, which are available at default frequencies from DDR4-2133 to DDR4-2666. The default DDR4-2133 corresponds to Samsung’s part number K4A8G085WB-BCPB. Getting to DDR4-3200 at the memory’s rated 16-18-18-38 timings requires overclocking, which can be accomplished in one step by enabling the XMP profile of most Z370 or even Z270 boards.  Many AMD boards are also programmed to accept XMP values as a baseline for their firmware’s optimizations, but there are secondary XMP profiles for restricted boards (such as those that use H370 or B360) to fall back to.

Aorus' RGB Memory lighting control is currently only compatible with Gigabyte’s own software. RGB Fusion Link has been extended to support non-Gigabyte boards however, and it was nice to see Gigabyte's software fully compatible with our competing-brand test motherboard.

Like most competing products, Aorus RGB Memory carries a limited lifetime warranty. Unfortunately, memory of any kind is not yet documented at Gigabyte’s warranty page. So keep that printed warranty card handy until Gigabyte get its Web server sorted.

All of the kits here have two single-rank DIMMs and all rely on Intel XMP technology to automatically configure an overclock. The kits here are also all specified to use Samsung B-Die ICs, yet three of the kits are rated at DDR4-3600 rather than DDR4-3200.

In a not-too-surprising twist, we see that the two DDR4-3200-rated kits were unable to reach DDR4-4000 for our latency-optimization efforts, yet oddness takes over when we also see that the Aorus RGB Memory’s tightest-stable timings are perfectly aligned with T-Force XCalibur RGB at every other tested data rate. The Spectrix D41 DDR4-3200 kits that sit between them in the test series is just a little better at DDR4-3233 and DDR4-2666.

Though it was slowest at XMP defaults, Aorus' RGB Memory outperformed the XCalibur RGB at most other test settings. That puts it in fourth place in Sandra, but we’re really interested in seeing how well it performs in applications.

Aorus' RGB Memory didn’t have the highest performance, but it's also quite affordable. Of all five kits, only the Adata models were cheaper.

Playing around in our spreadsheet, we found that Aorus RGB Memory would have tied the leading XPG Spectrix D41 kit in value if its price had been $40 lower, of course these competing kits don't include a pair of LED-lit dummy DIMMs. You could ask yourself if the non-functioning Demo Modules are worth $40. If you’re already spending money on RGB and you crave the look of four populated RAM slots and have no need for 32GB or more of memory, they probably are.

But an arguably reasonable value isn’t enough to win us over given the Aourus' fourth-place finish in our tests, particularly given it lands just ahead of our worst-tested competing kit. If it saves you from splurging on older or much-pricier memory, this kit is worth considering. But if you care more about performance and value, there are better options out there.