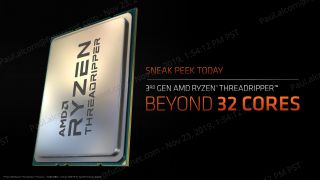 Update 2/7/2020: Check out our AMD Ryzen Threadripper 3990X review to see how the chip stacks up against the competition.

In an expected but much-anticipated announcement, AMD revealed today that it has a 64-core 128-thread processor coming to market in 2020.

The chip's beastly 280W TDP helps explain why AMD moved forward to the new sTRX4 socket, though, as the hefty processor will surely need a beefier power delivery subsystem.

The new Threadripper 3990X will likely drop into the newly-minted TRX40 platforms, but like the Threadripper 3970X and 3960X we reviewed today, it won't be backward compatible with existing X399 motherboards.

Aside from noting that the chip will have an unbelievable 288MB of total cache, AMD didn't reveal any further details. However, given what we know about the Threadripper 3000 architecture, we know the chip will support PCIe 4.0, though the number of lanes it will expose to the user remains unknown.

The Threadripper 3000 design is based upon the same design as AMD's EPYC data center chips. As shown in the graphic above, the design will move from the four compute chiplets present on the Threadripper 3970X to an eight-chiplet design, just like the EPYC Rome processor pictured below.

AMD's 32-core Threadripper 3970X also adheres to a 280W TDP envelope, but it's important to note that these measurements are based on AMD's definition of the amount of waste heat the cooler should be able to dissipate, and not the chip's actual power consumption. As such, the 3990X will likely draw more power than its 32-core counterpart. It's also logical to expect AMD to pare back the base clocks significantly from the 3.7 GHz we see with the 3970X, but the company's strategy of using a mix of faster and slower cores could still allow it to maintain a relatively high boost frequency.

Intel is already left with no real direct answer to AMD's latest 32-core Threadripper 3970X, as its comparable offerings slot into a higher price tier for the workstation market and come on motherboards equipped with a massive server socket that increases costs. It's unclear how the company will respond to the Threadripper 3990X.

It wouldn't be surprising if AMD's 3990X debuts at a lower price than Intel's 28-core W-3275 that currently retails for $4,449, but AMD hasn't shared concrete pricing details.

AMD says the Threadripper 3990X will arrive in 2020 but hasn't given a firm date.