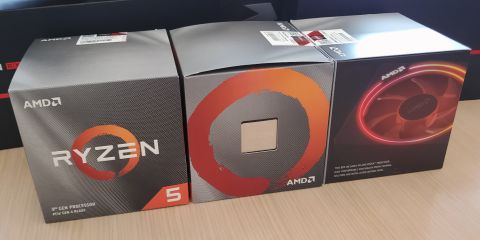 The ARES-6 web browser benchmark makes its debut in our lineup due to its focus on the latest and greatest JavaScript features, with a heavy focus on forward neural networks used for machine learning tasks, and browser responsiveness. The 3600X offers an amazing performance boost over both the first- and second-gen Ryzen models, highlighting AMD's diligent work on improving IPC. Intel's processors continue to wield the company's frequency advantage, which equates to higher per-core performance, to great effect as they lead by substantial margins.

Speedometer 2 and Jetstream 2 tell a similar story. While AMD's processors are fast enough to deliver a great user experience, the Intel processors still hold the lead. However, the Ryzen 5 3600X is competitive with the stock -9600K in several of the tests, and carves out a slight lead in WebXPRT 3.

You'll notice that overclocking the Ryzen processors doesn't yield any improvement. That's because the processor is still limited to its 4.4 GHz maximum boost speed during these lightly-threaded tasks.

We see some gains via overclocking the Ryzen 5 3600X, but they aren't as pronounced in the Office suite. Again, the beefier cooler offers little additional performance uplift.

The LLVM compiler benefits from extra threads, handing the 3600X an easy lead over the -9600K, even after we overclock the Intel silicon. The 3600X even grapples with the 12-threaded -9700K in this test. The flagship Ryzen 9 3900X offers the best performance by far, easily beating the rest of the test pool, even at stock settings.

The application start-up metric measures load time snappiness in word processors, GIMP, and Web browsers under warm- and cold-start conditions. Other platform-level considerations affect this test as well, including the storage subsystem. The Core i5-9600K takes a relatively slim lead over the 3600X, but adding a PCIe 4.0 SSD to our Ryzen test system swings this benchmark in favor of the Ryzen 3000-series processors.

The photo editing benchmark measures performance with Futuremark's binaries using the ImageMagick library. Common photo processing workloads also tend to be parallelized, which plays well to Ryzen's multi-threaded heft. It isn't surprising, then, to find the 3600X taking the lead over the stock -9600K.

Prev Page Project Cars 2, The Division 2, and World of Tanks enCore Next Page Rendering, Encoding, Compression, Encryption, AVX
35 Comments Comment from the forums
Be In the Know