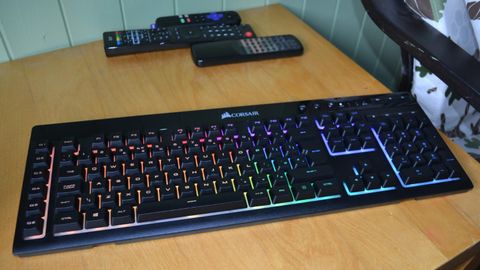 Despite being a membrane keyboard, the Corsair K57 does many things right. If consistent, reliable wireless connectivity and luscious RGB lighting are your top concerns, go for it.

It’s rare that we offer membrane keyboards much attention around these parts, but Corsair’s freshened-up take on the tech deserves a look. The Corsair K57 RGB Wireless Gaming Keyboard isn’t just a membrane board. It also carries a whole host of Corsair's new technologies in the form of Slipstream wireless (which offers incredibly fast 1ms polling rates) and the lower-power, brighter Capellix LEDs for RGB lighting.

In theory, this is a gaming keyboard that you can take with you on-the-go for a variety of tasks. But $99.99/£89.99 is not cheap for a membrane keyboard. The inclusion of a wireless radio and the necessary battery makes the K57 double the price of the wired-only Corsair K55 RGB keyboard ($49.99/£54.99), which is already on the more expensive end of the membrane market.

With that said, if losing real mechanical switches is a sacrifice you’re willing to make, the K57 brings some very premium tech down to a more affordable level.

One of the ways Corsair is able to deliver high-speed wireless connectivity and per-key RGB lighting for under $100 is by chipping away at the bill of materials. The K57 has an all-plastic design, which cuts the weight down but also takes away from the feeling of rigidity when compared to aluminum or steel-topped keyboards. I could flex the keyboard fairly easily while holding it in both hands, and it even showed a little give when I pressed centrally located keys hard. That's not to say that this won’t stand up to a knock, but that’s certainly a mark down.

Plastic also plays a big part (and indeed the only part) in the wrist rest, which follows Corsair’s tried-and-true design. It’s clever in that it clips to the front of the keyboard to stay secure. It's also hinged so that using the K57’s feet doesn’t hinder the wrist rest's attachment. But this wrist rest didn't bring me any comfort. Your personal preference may differ; however, I really disliked the feeling of the wrist rest's rough, textured plastic. Something lightly padded, or at least smooth, would have been a far better choice. Ultimately, the wrist rest felt cheap and nasty, and I found that the K57 is best used without it.

Let’s not focus only on the negatives, though. There are features here that help the K57 feel a lot more premium, even aside from its RGB lighting. Media controls are well catered for, and the 7 dedicated buttons make this well-suited for use while lounging. You may notice that the keyboard doesn't feature the same volume roller found on Corsair's mechanical keyboards. There’s a row of dedicated macro keys, most of which are easily accessible with a pinkie; although, reaching the top left G1 key requires some stretch.

With that macro row and number pad, the K57 probably has more keys than it really needs. It’s wide enough for a lap, but lacks the lapboard option of last year's K63, so I'd argue that offering a tenkeyless option for a smaller price would have been a better deal.

For a membrane keyboard, the K57 is surprisingly stiff. There’s a very distinct bump at its keys' actuation point, and it takes a fair amount of pressure to get past it. It’s the most mechanical-feeling membrane we’ve tested in a long time, and that's a good thing. Where heavy fingers might accidentally input an inadvertent string of repeated characters when resting on, say, Cherry’s light MX Red switches, these keys won't be pressed accidentally.

However, that stiffness comes with its downsides, the most notable of which is the rubbery pop feeling of each actuation. It’s not a smooth experience, and those dead set on the the crisp linear action of mechanical keys will want to look elsewhere. That said, after two weeks with this as my primary keyboard, I got very accustomed to its moderately squashy feel. It’s definitely a better experience than using a cheap membrane board and more than fast enough when gaming too.

It took me a while to come to terms with the K57's layout. Dedicated macro keys are just fine, but the"Ctrl" key is wider than normal and was off-putting at first since I sometimes use this key to position my left hand.

Once I adjusted though, I hit my usual typing speed with very few errors – a testament to its almost error-proof switches.

When running on batteries, the K57 (by default) switches to a standby mode after 15 minutes of inactivity, killing the lighting and waiting for you to type before it'll turn back on. The problem is it doesn’t cache the input used to wake it up, meaning you lose a keystroke every time you come back from a break. This isn't a critical flaw but certainly a minor annoyance. You can disable the feature if don't mind the hit to the battery life.

Compared to other membrane keyboards, the stiffness of the K57's keys make it uniquely suited for gaming.

It’s quiet enough to be all but silent when streaming or talking in a Discord chat. It's responsive enough so that every input is deliberate, not accidental. I prefer the audible clickiness of mechanical keyboards, so I didn't find this enjoyable, but the keyboard is perfectly functional for gaming

Tested on action games like Enter the Gungeon and used in an attempt to up my 40-line record in Tetris clone NullpoMino, I didn't notice any perceivable lag difference between running in cabled mode or through the Slipstream wireless connection. With the resistance of the domes, it took a mighty hand to type very quickly. This is a rare occasion where a keyboard with Cherry MX Red switches may be a better option; however, that would have had an impact on the keyboard's price.

I also found that the slightly indistinct end point (and the microscopic distance between the inversion of the rubber dome and the actual point of actuation) led to a couple of notable non-registers during intense moments of gameplay.

Missed keypresses are not the fault of the keyboard's wireless tech. A 1ms response is the new hotness in wireless peripherals, and Corsair’s new Slipstream protocol (like Logitech’s Lightspeed before it) meets that magic number. That’s still a slight overhead on top of usual USB polling speeds, so you’ll get microscopically faster response times if you run the K57 using its Micro-USB cable. You probably won't be able to notice the difference on your own, but peace of mind is a funny thing.

The K57 also supports Bluetooth channels, meaning you can hook it up to three devices and flick between those connections by combining the properly-placed (i.e. within the right-hand Ctrl cluster) Fn key and F5-F7. This worked well and with great range -- even the Slipstream wireless connection easily stretched the length of a large lounge and performed flawlessly without any missed presses.

Again, any misses weren’t the fault of the wireless transmission. However, it's worth noting that when I tested the keyboard next to an Asus ROG Strix Carry wireless mouse with the transmitters for each plugged into the same USB hub, I encountered massive interference that rendered both devices unuseable. However, I wasn't able to replicate the issue with any other wireless devices, and switching the mouse to Bluetooth mode was enough to correct it.

The K57 uses Corsair's Capellix LED technology, which basically clusters together super-tiny RGB LEDs in a dense matrix, theoretically reducing power consumption and increasing brightness. Regarding power consumption, Corsair quotes 35 hours usage with LEDs on and 125 without, which is impressive staying power for a wireless keyboard. And when dialed up to full brightness, the RGBs made a dramatic and distracting feast for the eyes. The translucent white key base created a little color bleed between keys, meaning isolated effects weren’t quite as sharp as they might be otherwise.

Corsair’s iCUE software scores the keyboard plenty of points by making building custom lighting effects quick and easy. I kept myself entertained for longer than I'd care to admit by layering different effects together. On the other hand, it's not the most intuitive interface, and it could offer more options. For example, I couldn’t find a way to select which microphone to use for its visualizer input. But the software offers plenty of RGB lighting options.

Note that you’ll need to hook up the USB cable and leave wireless mode, at least temporarily, to pull off firmware updates.

There are so many little wins with the Corsair K87 Wireless Gaming Keyboard. The wireless tech is top-level with fast response, and you get multiple options for connectivity. The RGB lighting is a real treat for the eyes and reasonably kind on battery life. Corsair did a good job in making the K57 feel more like a mechanical keyboard than a membrane one, more so  than any other membrane we’ve tested to date.

That said, the bottom-end squash is still there, and it's heavy on the plastic. You’ll get used to this, but should you really have to force yourself to like how a keyboard feels? On top of that, despite the plastic feel the K57's price point is closer to that of some sturdier mechanical keyboards.

But if you're willing to go without mechanical switches, this is the best membrane gaming keyboard we've found. And it's lighting and wireless capabilities will not disappoint.