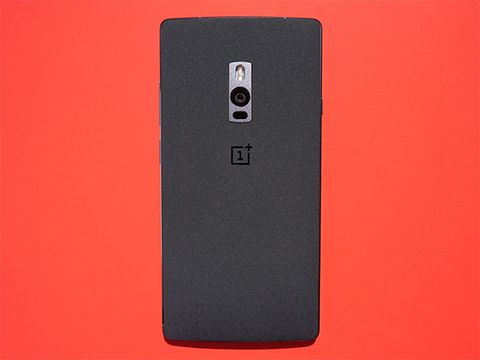 The OnePlus One was lauded as having one of the better cameras in its class, although its low-light images were a bit noisy and HDR processing was slow. It'll be interesting to see if the OnePlus 2 can improve upon the One's performance and achieve the same distinction. The rear camera is a 13 MP shooter with dual LED flash, similar to the setup in OnePlus One. However, the similarities end there. The OnePlus 2 includes optical image stabilization (OIS) to combat shaky hands while holding the shutter open longer. It also includes a laser autofocus system, a feature first seen on the LG G3. The laser works as a rangefinder for measuring the distance to the subject, which allows it to focus much faster. For long distances or sunny outdoor scenes, however, this method is less reliable due to the small sensor size and IR interference from sunlight, so the camera switches to the slower contrast detection autofocus method.

Note: For an explanation of camera hardware and terminology, please see our Camera Phone Technology 101 article.

The rear camera utilizes an OmniVision OV13860 PureCel sensor featuring backside illumination (BSI) and an optical format of 1/2.6". Pixel size is 1.3μm, larger than the 1.12μm used by most other smartphone cameras, which should allow it to capture more light and improve dynamic range. The sensor captures images natively at a 4:3 aspect ratio.

The optical stack consists of six lens elements with an f/2.0 aperture, giving it the ability to capture 41 percent more light than the iPhone 6s Plus. It also compares favorably to the lenses in Samsung's Galaxy S6 edge+ and Motorola's Moto X Pure Edition, which only capture 2 percent and 9 percent more light than the OnePlus 2, respectively. Combining a reasonably large aperture with the sensor's 1.3μm pixels should help boost the OnePlus 2's low-light performance. The addition of optical image stabilization (OIS), a feature missing from the OnePlus One, should further improve low-light image quality by allowing for longer exposures at lower ISO settings.

The rear camera also has a 35mm equivalent focal length of approximately 28mm, the same as Samsung's Galaxy S6 edge+, which increases the camera's field of view and captures a greater portion of the scene.

The front camera utilizes an OmniVision OV5648 5 MP sensor with an f/2.4 aperture wide-angle lens. This puts it on par with current flagships such as the Moto X Pure Edition, iPhone 6s Plus, and Galaxy Note 5.

OnePlus' camera UI is simple and streamlined. In landscape mode, the controls are all stacked on the right side. There are toggles for the self-timer and flash at the bottom, a big shutter button in the middle, and a toggle for front/rear camera selection at the top. There's also a menu button for activating the rear camera effects: Beauty, HDR, and Clear image. Beauty mode works as expected, softening skin tones and blemishes in human subjects, and Clear image combines multiple shots to increase detail. Unlike Samsung's Galaxy devices, it does not show a realtime preview of the HDR effect, and HDR processing takes about two seconds per image. Holding down the shutter button engages burst mode that takes about five pictures per second.

Swiping up from the bottom (or left in portrait mode) works in a similar fashion to Google's camera app and brings up a list of shooting modes as shown in the image above. This only works reliably when in portrait mode, however. In landscape, the menu is either not rotated properly or fails to show some of the options.

General camera settings can be accessed by tapping the gear icon when viewing the camera modes. The few available options are shown in the screenshots below. It's a bit odd that the three still image resolution options are buried in this sub-menu when the video modes are accessible from the menu button next to the shutter control on the main screen.

Shooting in auto mode is a pretty straightforward affair. Point the camera at your subject, wait for it to focus, and hit the shutter button. Tapping the screen lights up the selective focus control, a pair of concentric circles denoting the focus target along with a small sun icon. Dragging this icon in a clockwise direction around the circle increases brightness, while dragging in a counterclockwise direction decreases it. These are the only available camera controls in auto mode. Any extra settings are buried out of the way where the casual user need not worry about them.

As of OxygenOS v2.1.0, the OnePlus 2 camera app includes a manual shooting mode and RAW image capture support. Its manual mode is not nearly as comprehensive as LG's, but it provides basic control over focus, shutter speed, white balance, and ISO. The interface uses a rotating wheel (shown below) that makes it easy to perform adjustments.

The front-facing camera can take photos, videos, and time-lapse recordings. It functions much the same as the rear-facing camera except that there are no options to change the resolution; all pictures are shot at the full 5 MP (2592x1944), and all video is captured at 720p.

The Snapdragon 810 powering the OnePlus 2 is capable of encoding and decoding 4K UHD video completely in hardware (for higher performance with lower power consumption) using the new H.265 (HEVC) format. Unfortunately, the OnePlus 2 does not take advantage of this capability, using the H.264 (AVC) format instead for recording video.

The OnePlus 2 offers the standard set of video recording modes and nothing more. It records 4K UHD video at 42 Mb/s, the same as the HTC One M9 and last year's Nexus 6 but not quite as high as the 48 Mb/s of the Galaxy S6. At 1080p, the OnePlus 2 records at 20 Mb/s, the same as the OnePlus One but higher than the 15 Mb/s of the Asus Zenfone 2 or 17 Mb/s of the LG G4 and Galaxy S6. There's no 1080p@60fps option even though the underlying hardware (camera sensor and SoC) supports it. The OnePlus 2 also does not utilize HDR when recording video even though the rear camera sensor supports this too.

For the most part, videos shot with the OnePlus 2 are pretty good. Indoor video shows some noise in dim lighting and exposure fluctuates a bit too much. The laser autofocus does not work all the time either, forcing the camera to fall back to using the contrast detect method that struggles to maintain focus lock at times and is noticeably slower. Outdoor video looks better with good white balance and exposure, although there is a tendency to slightly wash out lighter colors. Many phones struggle when shooting scenes with a mixture of shade and bright sun but the OnePlus 2 holds its own—even without using HDR—adjusting exposure slightly to compensate without the dramatic shifts in brightness we've seen in lesser cameras.

Phones that use HDR, including the iPhone 6s Plus, Galaxy S6 edge+, and Moto X Pure Edition all produce better video, though. The autofocus is on point most of the time; however, it struggles when focusing on objects in the distance, a shortcoming of laser autofocus. 4K video looks crisp and detailed, but the camera app enforces a 10-minute time limit. Clips shot in 1080p or 720p look progressively worse. 720p video looks especially muddy with details getting lost in shadows and other darkened areas.

The OnePlus 2 uses OIS in all video modes, which does help smooth the recording by reducing vibration from shaky hands. However, like other phones that use OIS in video mode, the OnePlus 2 suffers from the "wobbly frame effect" whenever the camera changes direction. Some phones use digital or electronic image stabilization (EIS) in addition to OIS to help dampen this effect, but not the OnePlus 2.

Slow motion video is a rather low-fi affair compared to other flagships. The 720p@120fps video is not smooth at all, making it unsuitable for recording fast-moving objects, which is the whole reason for using it in the first place. The edges of objects are very blurry and there's a lot of noise, more so than the regular 720p mode. There's also no audio track recorded with the video.

Video from the front camera is of much lesser quality than anything shot with the rear-facing camera. It shoots in 720p only, sacrificing a good deal of detail. The front camera also struggles to find correct exposure settings when shooting in a mix of sun and shade and often overexposes bright areas while leaving shaded areas dark.

OnePlus packs this phone with powerful hardware but fails to take advantage of it, underutilizing the Snapdragon 810 SoC for processing and not leveraging the full capabilities of the camera sensors. The lack of HDR and EIS negatively impact video quality, and the slow motion video mode is essentially unusable. The rear camera does shoot decent video, especially outdoors, but it certainly does not rival video shot with more expensive flagship phones. Overall, the OnePlus 2 presents a pretty mediocre video recording experience.