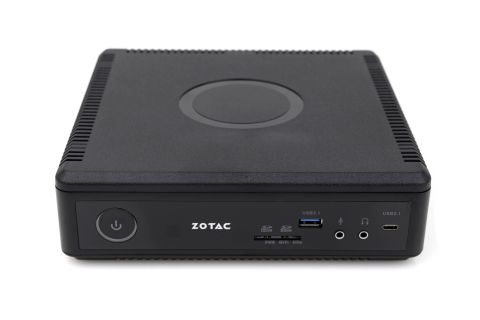 Switching to in-game benchmarks, the Zotac Zbox Magnus EN1060K-U seems to fare better against its barebones competition, the Gigabyte BRIX Gaming VR. Running the GPU-focused Ashes of the Singularity: Escalation tests exposes the Zbox as contender, and the poor thermal performance of the Gigabyte offering puts the EN1060K-U in a more favorable light with real-world gaming workloads.

The Bioshock Infinite results tell a similar story, with the EN1060K-U pushing past the BRIX Gaming VR at 1920 x 1080 and 3840 x 2160. The CPU inside the Zbox gives it the lowest minimum framerate in the bunch, but the GPU performance is able to boost its average framerate ahead of its direct barebones competition. Bioshock is also the only game in our suite that is quite playable at 4K with GTX 1060-equipped systems, even with the highest settings enabled.

DiRT Rally is another game that doesn't rely much on the CPU for performance, and the EN1060K-U maintains its lead against the Gigabyte BRIX Gaming VR. Using the most-demanding settings at 1080p, the GTX 1060-equipped systems all fall slightly short of the ideal 60FPS average. At 4K, we're met with unplayable average framerates from all of the PCs in the field, but you can get there by reducing the AA, textures, and effects.

The Zotac Zbox Magnus EN1060K-U takes its familiar position in the GTAV benchmark at 1920 x 1080, besting the Brix and falling behind the Vortex with an average framerate of 36.39 FPS. However, it still fetches the lowest minimum framerate at this resolution by a longshot, and you'll have to reduce the detail settings to get to a target 60 FPS. At 3840 x 2160, a GTX 1060 graphics card is brought to unplayable framerates with the eye candy at max, and the BRIX manages to push a slightly better average framerate than even the Vortex. That is a testament to the EN1060K-U's thermal performance.

The Direct3D 12 version of the Hitman benchmark favors CPU performance, and it's because of this we see the Zotac Zbox Magnus EN1060K-U fall to the bottom of the chart again. This is particularly noticeable at 1920 x 1080, where the Zbox nets the lowest minimum framerate. However, it still averages above 60 FPS with all of highest detail settings enabled at 1080p. Turning up the resolution to 3840 x 2160 pushes the bottleneck to the GPU, and the Brix's lead over the Zbox is less pronounced. The EN1060K-U also manages to achieve a better minimum framerate than the Gaming VR at 4K.

Shadows of War is a great game to weed out GPU performance discrepancies, and the Zbox is shown in a more positive light by netting the same average framerate as the MSI G25 Vortex 8RD at 1920 x 1080 and 3840 x 2160. The Gigabyte BRIX Gaming VR was exhibiting poor thermal performance in our review, and it definitely can't keep up in a GPU performance showdown against the better-cooled Vortex and Zbox. At 1080p, you'll be able to get close to 60 FPS average with all the candy turned up, but if you want to game at 4K, expect to turn down the detail dials to get playable framerates.

With all of the effects and details at their maximum, the Zotac EN1060K-U makes it past the 30 FPS mark with playable average framerates at 1920 x 1080 in Rise of the Tomb Raider. However, the eye candy cripples all of the GTX 1060-equipped systems in the field at 4K, with all of them achieving less than a 10 FPS average. Decreasing the settings will obviously net better performance, but the Zbox still triumphs over the BRIX with less than a 1 FPS lead.

The Zotac Zbox Magnus EN1060K-U ends our test suite where it started, at the bottom of the chart. The Division favors CPU performance using the DX12 API, and it's no surprise that the Zbox takes a backseat to the systems with better processors. However, the performance difference between the EN1060K-U and its direct competition, the BRIX, is negligible. It trails the Gaming VR by only 0.1 FPS at 1920 x 1080, and the Zbox ties the Brix at 4K.