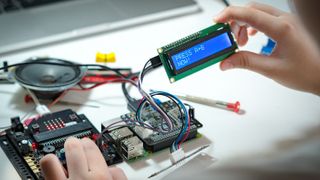 Many creators are pushing the boundaries of what we can build in hopes of creating a better, smarter, or even more whimsical future. Today we're looking at the best of the best. These are our picks for the top Raspberry Pi projects of 2019, in no particular order.

If you want a taste of what the community has been busy tinkering with this year, this is the list for you. And don't worry—we listed the source code on projects where it's available so you can create them yourself.

Engineering student Andrew Loeliger watched Pacific Rim and did what nobody else did—created a robotic hand that can be controlled remotely using a Raspberry Pi.

The robotic hand is operated by a user who wears a glove controller. Moving the glove will cause the robotic hand to move. A Raspberry Pi Zero transmits input information from the glove to a servo driver board on the robotic hand. Individual finger movement is controlled by a pulley system constructed of fishing line attached to a servo motor. The entire project cost about £300, Loeliger told us.

Loeliger is working to add more features, including haptic feedback in the glove that would allow the user to feel what the robotic hand is touching. He hopes the concept can be used to help first responders in hazardous situations. We could see a number of use cases, including helping disabled folks, enabling scientists to handle dangerous materials or shaking hands with someone in a remote meeting (don't squeeze too hard).

This project was created by a group of friends and mechanical engineering students at Carnegie Mellon University—Taylor Tabb, Mitchell Riek, and Evan Hill. Together, they created a Raspberry Pi-powered grilled cheese making machine known as the Cheeseborg.

The machine is voice activated, using Google Assistant on a Raspberry Pi to trigger the grilled cheese making process. The Cheeseborg handles everything from assembly to cooking before delivering the sandwich into a pocket on the side of the machine. Read more about the project and follow its progress on Taylor Tabb's website.

This project draws up some serious creativity and brings old technology to a new level by integrating IoT features. Using an old Roland DXY-990 plotter, Liege Hackerspace founders @drskullster (Jonathan Berger)  and @iooner, created a Pi-controlled plotter that can write tweets in real time. You can catch a video of the Pi powered tweet plotter in action on Reddit.

Iooner uses the Raspberry Pi to relay tweets to the plotter using HPGL code. You can adjust what parameters are used to select tweets in the source code—add a specific hashtag or even a list of hashtags.

Iooner was nice enough to share the source code for the creation. If you want to get in on this project yourself, everything you need to get started is available on github.

It's amazing what a Raspberry Pi can do with a few attachments. Creator Thomas Megel uses more than a few extra parts for his project— an open source 3D scanner called OpenScan.

The 3D scanner uses a Raspberry Pi to rotate and scan an object. It then creates a 3D model of the scanned item using photogrammetry. Thomas uses an RPi camera but suggests trying other options like a smartphone or DSLR camera.

He’s made the OpenScan project easily accessible to the Pi community. If you want to create your own Pi powered 3D scanner, check out the kit on his website. You can follow OpenScan on Instagram and Facebook.

Android developer Ievgenii Tkachenko is taking Pi projects to new heights by sinking his Raspberry Pi deep underwater. If you grew up with RC cars, you may have pictured what it would be like to pilot an RC submarine—this is essentially what Ievengii has created with his underwater Pi drone. It features motion control, lights and a camera to complete the experience.

Ievgenii's underwater drone is propelled by four motors. To send control signals to them, he designed an Android app to interface with the Raspberry Pi. You can use a touchscreen to control the input or even a gamepad.

You follow Ievgenii's progress and see more demonstration videos of the project on his official YouTube channel.

The Chord Assist project was designed by Joe Birch. It uses a Raspberry Pi connected to a guitar to display chord input.

It features a refreshable braille display and can vocalize chord information—making it easier for sight-impaired persons to play, learn and tune the guitar. The project also benefits hearing-impaired artists who can read the chord output information on the LCD screen.

Chord Assist uses Google Assistant to operate. It also requires a microphone, speaker and series of displays for data readout. You can read more about the project and follow its progress on the official Chord Assist website.

It's 2019—of course you can make holograms at home. At least, that's what school teacher Dan Aldred did when he created his Pi Hologram Machine. It all started after watching his students do something similar with an old CD case and cell phone.

It features four acrylic panels (though he recommends using glass) arranged in a pyramid shape. Hologram videos display on a screen just above the pyramid, creating a 3D image inside. He uses a Raspberry Pi A+ to control the whole operation.

If you'd like to see how it works, Dan uploaded project scripts to github. Check it out and maybe even make it yourself.

Some projects are just super—like Oracle's Raspberry Pi Supercomputer project from the Oracle's OpenWorld Convention in September. This Raspberry Pi cluster project was made by a team from the company. When asked why they chose to use hundreds of Pi’s instead of a virtualized arm server, they simply stated, "...a big cluster is cool."

It features over 1,000 Raspberry Pis for a total of 1,060. The cluster is made with racks that house 21 Raspberry Pi 3B+ boards each. The system is operational—running Oracle Autonomous Linux. This project definitely isn't built for function, but the novelty is plenty exciting.

If you don't feel like searching for your music by typing, why not try record recognition? This maker, known on Reddit as sp_cecamp, created a Pi controlled record scanner that can play music for you by simply placing a record in front of it.

The Raspberry Pi uses a camera to take a photo of the album before checking it against a database. Once it has confirmed the album, it plays it for you using whatever streaming service you choose to connect.

Sp_cecamp labeled the project Plynth. You can read more about it and follow its progress on the official Plynth website.

Words almost can't describe the ingenuity of the Pi community. When makers see a problem—they fix it with Pi. This maker, known on Reddit as Ccundiff12, owns a Genie Boom. When it gets stuck, it takes two people to move it—one to drive a tractor and one to drive the Genie Boom.

He took this as an opportunity to control the Genie Boom with a Raspberry Pi and yes—a gamepad controller will work to steer the Genie Boom.

You can watch the Pi powered Genie Boom project in action on Reddit.

MORE: Raspberry Pi GPIO Pinout: What Each Pin Does

MORE: How to Use Raspberry Pi as a VPN Gateway