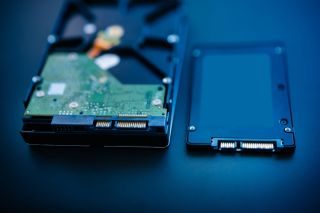 In a recent Product Change Advisory, AMD has announced that the company has officially terminated support for the StoreMI technology. But fear not, the chipmaker confirmed that a brand-new version with improved features is slated for release in the second quarter of the year.

For those of you that are not familiar with StoreMI, it's a feature that AMD introduced with its Ryzen 2000-series (codename Pinnacle Ridge) and corresponding 400-series chipsets. AMD subsequently added support for the X399 chipset. The latest Ryzen 3000-series (codename Matisse) chips chipsets and high-end X570 chipset can also take advantage of StoreMI.

In a nutshell, StoreMI essentially lets you combine up to 256GB of solid-state storage with memory so speed up conventional hard drives. StoreMI is based on tiered storage. The feature combines your SSD and hard drive into a single volume. The software stores your most frequently used files on the faster drive so you can access them quickly. AMD claimed that StoreMi could accelerate Windows boot times by up to 2.3 times quicker and allows you to load your applications and games up to 9.8 times and 2.9 times faster, respectively.

Effective of March 31, the StoreMi software will no longer be available for download at AMD. You can rest easy if you downloaded StoreMI before the termination though as AMD will generously let you continue to use the software. However, the chipmaker will be redirecting its resources to work on the replacement so the company will no longer provide users with technical support.

We reached out to Enmotus, the company behind the software, which provided us with the following statement:

"To help concerned StoreMI end users, Enmotus has decided to offer StoreMI customers that register with us free technical support for existing installations from April 1st until May 15th of this year. Given we have a lot of fans out there, we are also offering the registered users upgrades to FuzeDrive 256 at $9.95 (50% off the regular price) for a period of time. Of course, FuzeDrive will be fully compatible with our upcoming MiDrive and also provide the freedom for end users to migrate their FuzeDrive configurations to Intel platforms also."

AMD advises users against downloading the StoreMI software from a third-party website since the chipmaker cannot ensure you if the download is safe or reliable. AMD recommends you use an alternative solution, like Enmotus FuzeDrive as a stop-gap solution meanwhile you wait for the future replacement for StoreMI.