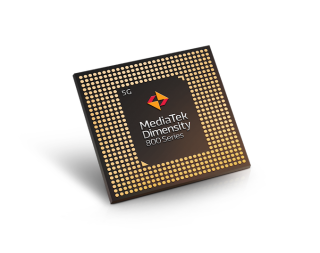 Unlike the new X50 and X55 chipsets from Qualcomm, the Dimensity 800 is a single-chip 5G SoC. MediaTek said this allows the SoC to save on power--especially in conjunction with the reduced power draw associated with TSMC's 7nm process.

On the CPU side, the octa-core design packs four big A76 cores and four low-power A55 cores, both of which are clocked at 2GHz. This is a step down from the four A77 cores in the flagship Dimensity 1000 that MediaTek announced in 2019. The GPU, meanwhile, is a Mali-G57MP4. On the AI side, the Dimensity 800 features MediaTek’s APU 3.0 with FP16 support. It offers performance of up to 2.4 TOPS--which is a notable decrease from the 4.5 TOPS performance offered by the Dimensity 1000.

On the media side, the Dimensity 800's image signal processor (ISP) supports up to 64MP image sensors as well as multi-camera setups. There is also support for 2160p at 60 frames per second video encode and decode and 90Hz Full HD+ displays.

The Dimensity 800 is expected to come to market before the end of the first half of the year.

In November, MediaTek and Intel announced a partnership to bring 5G to laptops in early 2021.