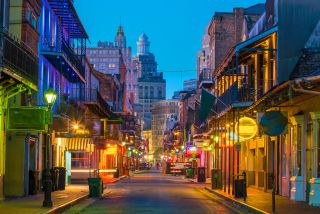 It turns out there's one good thing about hurricanes: they can help the cities they hit prepare for cyber attacks. Or at least that's what New Orleans officials said after their systems were targeted by phishing and ransomware attacks on Friday.

Nola.com reported that New Orleans government employees responded swiftly to the attacks. They started to notice suspicious activity around 5am, received more reports about potential issues at about 8am and shut down their systems at 11am.

Officials confirmed that all of the systems connected to their network were shut down. This led to the closure of some offices, and the city's official website was taken offline, but it was also supposed to isolate any potentially compromised devices.

ABC News reported Saturday that New Orleans was able to keep many crucial services--including 911 dispatch--operational despite their inability to use their computers. Here's how one official explained the city's swift response to the attacks:

Collin Arnold, the city's director of homeland security, said that the city was well-prepared for this kind of incident, as a result of recent hurricane disasters. [...] "We can operate without internet, without the city network," he said. "It makes it obviously more difficult, but from a public safety standpoint ... we've trained to do that, because of hurricane season."

Most city governments don't have to worry about hurricanes. As cyber attacks become more common, however, some of those landlocked cities might look to New Orleans as an example of how they can effectively respond to those threats.