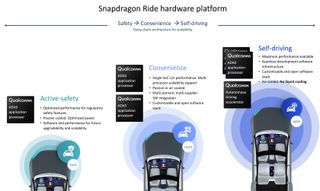 In a major unveil at CES 2020, Qualcomm announced that it has entered the market of Level 2+ advanced driver assistance systems (ADAS) and autonomous vehicles with its end-to-end Snapdragon Ride platform, which is set to offer up to 700 TOPS when it launches in 2023. The company also announced its new Cloud-to-Car platform to provide over-the-air updates and other functionality.

Capabilities include trip planning, handling lane changes and making decisions about safety. The platform covers the full range of autonomy. At the low end, it covers L1/L2 Safety ADAS with lane assist and autonomous braking, among other features. Higher up is the more advanced L2+ ‘Convenience ADAS’ that includes autonomous highway driving and autonomy over short ranges such as parking. At the top end, there is L4/L5 for fully autonomous (urban) driving for robotaxis and other vehicles.

In terms of hardware, Snapdragon Ride consists of a full set of sensors including cameras, lidar and radar; C-V2X vehicle communications; and a Snapdragon Ride Safety SoC for sensor fusion and algorithms. This includes a multi-core CPU, GPU and AI and computer vision (CV) engines, image signal processors (ISPs) and Digital Signal Processors (DSPs). The platform scales from 30 TOPS for L1/L2 to 700 TOPS at 130W for L4/L5.

These specifications put Snapdragon Ride on track to be the most powerful and most efficient offering in the market in 2023, compared to Mobileye’s 119 TOPS EyeQ6 at 40W and Nvidia’s 200 TOPS Orin estimated at 70W by AnandTech. However, as a new entrant into this market, Qualcomm will have to prove its platform is up to par not just in specifications but also for real-world applications. To that end, Qualcomm senior vice president Nakul Duggal said in a statement:

Qualcomm further touts its Autonomous Stack software infrastructure as an open platform to which customers could add their own components. It is also modular, meaning that customers can pick and choose elements of the stack that best fit their needs.

Qualcomm expects Snapdragon Ride to be available for pre-development to automakers in the first half of 2020 and expects vehicles to be in production in 2023. It is designed for automotive-grade ASIL-D safety.

With Snapdragon Ride, Qualcomm joins Nvidia and ADAS market leader Intel Mobileye to compete in the growing ADAS and upcoming self-driving system (SDS) spaces. Qualcomm benefits from leveraging its current automotive activities such as dashboard and kinematics solutions. As an SDS is expected to sell for $4,000 to OEMs (per Mobileye) and include A.I. engines, this could become a $40 billion or larger market, so automotive is fast becoming the next playground for the major silicon and AI.I. chip vendors to spin their chips into. To that end, Qualcomm says it has an automotive order pipeline of over $7 billion.

Mobileye’s offerings are based on its EyeQ chips and its SDS is called AV Kit. Mobileye introduced two new partnerships spanning L2+ and Mobility-as-a-Service in China and South Korea at CES. Nvidia announced Drive AGX Orin in December. Other companies such as Waymo and Tesla are also working on their own proprietary AV solutions.

Qualcomm also announced the Car-to-Cloud Platform to give car makers the option to offer over-the-air updates, new features and on-demand pay-as-you-use services to customers. This is supposed to help keep systems up to date and future-proof vehicles. For automakers, it also provides the opportunity to gather vehicle analytics.

The platform will be available in the second half of 2020.