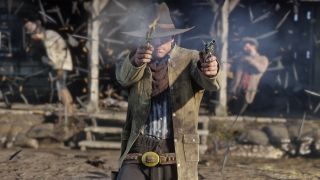 Red Dead Redemption 2 arrived on PC today. Its launch should have been heralded (console gamers have been singing the game's praises since October 2018) but instead many players have reported crippling bugs that prevented it from even starting. Rockstar Games responded to those complaints, saying that many of the issues appear to have been caused by people relying on outdated graphics drivers.

Some issues with outdated drivers were to be expected--Nvidia and AMD only released their drivers optimized for the game on Monday. They don't appear to be the only cause of Red Dead Redemption 2's issues, however, because some players have reported bugs even after installing the most recent drivers. Complaints about unsteady frame rates, issues with Rockstar's launcher and other problems abound.

Reddit user "Baggzio" claimed earlier today that Rockstar's support team said an emergency patch would be released to address some of these problems. The customer support team's official Twitter account hasn't mentioned an emergency patch, though, at least at time of writing. Instead, the account has primarily urged frustrated PC gamers to submit tickets describing their issues directly to the devs.

It has been difficult to take some of the complaints seriously. A few people seem upset that Red Dead Redemption 2 can't run at 60 frames per second at Ultra settings with a 4K resolution even when it's being played on a system featuring the RTX 2080 Ti. While that might be frustrating, that issue is not exclusive to Rockstar and might depend on what game you're playing.

Rockstar had an extra year to develop the PC version of the game, yet its launch has been plagued with issues. It's bad enough that Steam users might actually have dodged a bullet after being forced to miss out on the game's pre-order bonuses and to wait until December to play it.