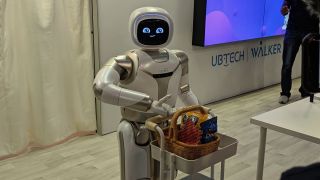 When I first saw UBTech's Walker robot at CES 2019, I was blown away by its ability to perform many of the tasks we'd want from a Jetson's-style butler. The 4.8-foot, humanoid robot could walk around rooms, grasp objects and hand them to you and even do a dance. A year later, the robot is still not ready for consumers, but it has come a long way, gaining much finer motor skills and the ability to maintain its balance, even under tough conditions.

During a CES 2020 demo, UBTech showed how far Walker has come. The robot rolled out onto the floor, pushing a cart filled with snacks. It then lifted the handle on a basket full of snacks and held it out to me. When I grasped it, Walker let go in order to let me take the object.

The robot then walked over to a table, picked up a bottle opener and used it to remove the cap from a bottle of soda. It picked up the bottle and a glass and poured the liquid in, without spilling.

UBTech said that the ability to pour drinks requires visual servo technology or the ability to use its cameras to judge the position of objects.  The same methods allowed Walker to uncap a marker and draw a picture of a flower on a piece of paper at another point in the demo.

Walker's hands aren't the only appendages which are working more naturally now. Where it had previously kept its feet parallel to floor, the robot now walks with a human-like gait that allows it to achieve 25 percent speed increase (from 1.5 to 2 km per hour) and balance better.

Speaking of balance, the robot has gotten really good at shifting its weight around in order to avoid tipping over. During the demo, Walker performed a number of serious Yoga poses, including standing on one foot and leaning back. When I tried to match the robot's motions with my own body, I couldn't keep up.

The robot can even maintain its balance when outside forces try to bring it down. On UBTech's invitation, I tried pushing down hard on Walker's shoulders and shoving it; the robot stood its ground. The robot can shake hands now too, automatically closing its fingers when you go to grasp its hand.

All of these improvements were made via software as UBTech hasn't made any physical tweaks to the robot since we saw it last year. It continues to have 36 motors, over 100 sensors and the same 170-pound, 4.8-foot body with 1.8-foot (540mm) arms that can lift up to 3.3 pounds (1.5 kg). Its face remains a 5.5-inch, 720p LED screen that can show emotions or, potentially, be programmed to do other tasks, such as conducting video calls.

On the inside, the Walker continues to be powered by two different PC chips, a Core i7-7500U and a Core i5-6200U. The robot uses a combination of a few different operating systems on these internal PCs, including Ubuntu, ROS and Android. Walker has both 802.11n Wi-Fi and Ethernet to connect to networks. Its 10 Ah battery promises up to 2 hours of battery life after a 2-hour charge time.

UBTech continues development on this ground-breaking robot, but doesn't have a public launch date. The company is targeting Walker toward the home, with an emphasis on helping seniors or just doing household chores. To make it robust enough to adapt to all these different conditions is a huge challenge. However, if development of Walker continues apace, this robot could eventually be a gamer-changer.