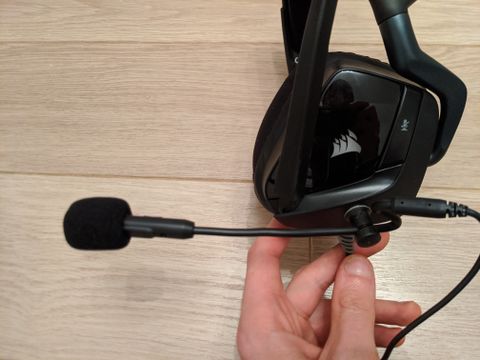 A couple of details away from being a no-brainer mic solution. A little too easy to dislodge, but the sound reproduction's immense compared with headset mics. The low-end is comparable to desktop USB mics.

Not everyone has the room or the inclination to get a podcast-grade microphone for the best-ever sound while gaming. A Blue Yeti is nice, but some people just prefer their microphones connected to their gaming headsets.

Now entering its fifth iteration, the Antlion Modmics look like regular ol' headset microphones but perform immeasurably better at sound reproduction. In addition to the USB version we're testing (£80/$70), 3.5mm and wireless versions are available. Across all these different models, the idea is the same: attach the Modmic to your headset using a simple sticky pad, and instantly upgrade your dulcet tones. You might decide to fit it onto a gaming headset which already has a mic, a headset with a detachable mic you'd rather leave detached, or a pair of headphones that didn't feature a mic out of the box. Given that it's the same price as many very reputable headsets though, this isn't a cheap way to boost your mic quality.

This USB ModMic is comprised of two main parts. The mic fitting is magnetized and features a zigzag-toothed design allows you to place the mic arm at different angles, and it affixes via a sticky pad which won't damage the surface of the headset underneath if you choose to remove it later. We wouldn't recommend trying to take off and reposition this fixing though - it's unlikely that you'll remove it without losing the stickiness or structural integrity of the pad, and you only get three replacements. Better to be sure before you stick it down.

It's an easy fix from a design perspective: a stronger magnet or greater magnetic surface area would sort it out immediately. Unfortunately as the consumer, you don't have that option, so extra care's needed when using this mic.

The mic arm itself completes the package. It doesn't exactly look like it wandered off a catwalk at Paris Fashion Week, but the simple design incorporates an ultra-flexible arm which can be bent to in excess of 90 degrees and still holds its form, and the mic head which comes supplied with a foam cover. There's a switch on the mic itself for swapping between omnidirectional and unidirectional polar patterns, and a rubberized, backlit mic mute inline button.

Far more attention has been lavished on the aesthetics of the Antlion ModMic USB's case. The Antlion logo lies imprinted over the top of the fabric finish, while inside you'll find a satisfyingly neat and compartmentalized interior akin to the kind of presentation you get from top-end headsets.

We only have one qualm about the design of this USB model: the magnetic strength is lacking. It's too easy to knock the arm loose and have the mic separate from your headset, particularly in the early stages when you're still getting used to this new way of doing things. If it's placed near the connecting cable of the headset itself, there's a danger that knocking the cable might even dislodge it.

You've likely heard it plenty of times elsewhere, but it bears repeating: it's incredible how much better this mic sounds than essentially any other headset mic. The condenser head and diaphragm are bigger than you'll find elsewhere, even in Sennheiser's beefy headset mics, and with that increased size it's able to reproduce sounds from 50Hz-20KHz using the omnidirectional polar pattern. For context, 100Hz-10KHz isn't uncommon on headset mics, which means the Modmic's omni pattern not only extends the high-end but massively broadens the low-end response. It doesn't sound quite as rich and detailed as a Blue Yeti, which can articulate a full 20Hz-20KHz, but it's cheaper and doesn't take up any space on your desk - just an extra USB slot.

A few accessories come with the mic: three replaceable sticky pads, and ten plastic cable routing fixings, should you prefer to keep your headset and mic cables tethered together. That's certainly the neatest option, but requires having two USB slots next to each other.

The foam pop cover also comes in the box and does its job very well.

You don't need any additional software to get the ModMic USB up and running - it's the very definition of plug-and-play. If you're using one with a headset which already features a mic though, a little software tinkering's required to ensure you're coming through the right apparatus. Setting the Antlion as your default input device in Windows will ensure your playcalls/requests for healing/unmissable banter doesn't fall on deaf ears.

This latest USB iteration of the ModMic transforms headphones without mics and gaming headsets with substandard ones into something more akin to a pair of cans with a Blue Yeti strapped to it. The sound reproduction is much closer to a pricier dedicated USB mic than any mic headset, which is a small miracle considering the size and weight. We find it too easy to dislodge the mic arm from its magnetized fitting with this current design, but except for that annoying detail this is a mod anyone who's serious about high quality voice comms should consider.