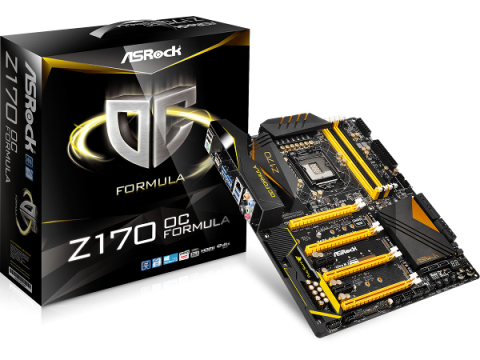 The Z170 OC Formula’s driver disk contains very little application software, instead requiring users to download most of ASRock’s applications. You’ll find those download links mixed in with a few freebies in the “App Shop” application, which is also responsible for finding driver and firmware updates.

Strangely missing from both the DVD and App Shop is the application this motherboard needs to make it special. ASRock Rapid OC can be downloaded from the motherboard’s support page on ASRock’s website.

As described in the Features section, a set of three buttons allows users to scroll through four overclocking options and increase or decrease them within the limits of firmware (which is constrained by hardware). This popup menu last only around two seconds after touching one of the motherboard’s corresponding buttons before disappearing.

The Z170 OC Formula pushed our Core i7-6700K to its expected 4.60 GHz at 1.30V, tying other boards for top overclocking honors. Advanced overclockers will find settings such as amplitude control and slew rate to deal with waveform-imposed limits that occur near the ragged edge of overclock stability.

The Z170 OC Formula also includes the widest range of memory settings of any Z170 motherboard tested so far. Fortunately, tuners who don't know what a setting does can leave the unfamiliar settings in Automatic mode.

Prev Page Introduction, Specifications & Features Next Page How We Test, Results & Conclusion
4 Comments Comment from the forums
Be In the Know