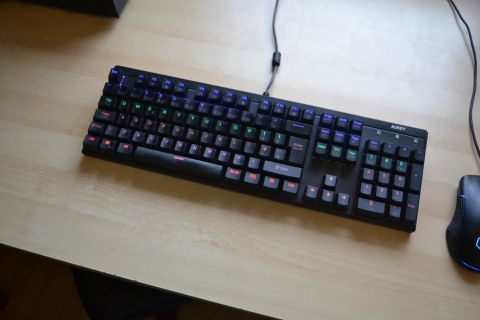 A blue-switched beast offering a fantastic first step into mechanical keyboards for those who don't want to spend too much. Not perfect, but not a disaster either.

Mechanical keyboards can be intimidating. There's a whole hyper-dedicated end of the keyboard market that dines out on only the finest switches and most delectable features. That's great, but are there options for those with smaller budgets, fewer demands or who are new to the world of mechanical keyboards?

Of course, the best mechanical keyboards aren't necessarily the most expensive. They're the ones with the best feel and sound and that provide what you want from the typing experience. The Aukey KM-G6 is priced at $39.99 / £39.99, which means it sits as far from the high-end keyboard market as possible be. But it still may have everything you need, especially if you're new to mechanical keyboards. It's not the best gaming keyboard, and at that price you wouldn't expect it to be, but it's definitely punching above its weight

Straight out of the box, the KM-G6 doesn't seem as cheap as its price suggests. It's a heavyweight keyboard (2.6 pounds), with a stiff and unyielding base, height adjustable feet, rigid keys with decent keycaps and absolutely minimal wasted space around them. First impressions count, and it's immediately clear that this isn't some half-baked emulation of a mechanical keyboard; it's a strong and realistic stab at making one for as little money as possible.

Closer inspection does, of course, start to highlight the many corners that have been cut. The cable is rather thin and has an oddly-placed ferrule close to what doesn't feel like the sturdiest hard-wired connector. Give the keyboard a hard tap, and there's the familiar ring of springs with just the right harmonic frequency to make your teeth grit. You'll either not notice this or it'll follow your every keystroke like a mosquito.

The keycaps are double-shot molded, meaning their font should last a while longer than those with a straight print process. The font and labeling on our review model is a little all over the place, but it's still very legible. There are pictures out there of the same keyboard with very different labeling, so be aware that these things may vary.

There are no extras included beyond a keycap puller, so you'll need to provide your own wrist rest if that's your thing. There are also no dedicated media controls, only integrated function variants.

The big question here is how good the Outemu Blue switches, an alternative to the more popular Cherry MX Blue switches, really are, and the answer really depends on which key you're hitting. In all my years of keyboard reviewing, I have never come across a set of switches quite as inconsistent as these.

Around the letters and numbers, the emulation of Cherry's MX Blue switches is not entirely bad. There's a good audible click to the keys, fairly crisp travel and a solid actuation point that doesn't vary from key to key.

On the downstroke, things can trend towards being a little springy and a touch wobbly. Even in the main body, there's a level of difference between different switches. The home row has a noticeably more crisp feel than the shift row, and straying towards the corners reveals certain keys have a softer feel and duller sound.

Some keys -- notably those with edge bracing, like the numpad's 0 or right shift -- trend towards the squashy, an unpleasant contrast when others have proven what's possible. Even here nothing is certain; backspace offers a solid clack while Enter (below it on the UK layout reviewed) bottoms out with a pillow-like finish.

This could be caused by numerous things, such as varying springs or something to do with the mounting of the mainboard. Whatever the cause, it's constantly noticeable from the perspective of someone with three other excellent mechanical keyboards on his desk already. Whether the same will be true if this is your first venture into the mechanical market isn't quite so clear.

As you would expect for something with blue switches, this is about as streaming-friendly as it is office-friendly: aka not much. It's loud.

For personal gaming, though, it does a commendable job. I took it through its paces in the typing-focused bullet torture of The Textorcist, and it did a decent job. I've felt better separation between keys, but any mis-presses were due to my fingers rather than the keyboard itself. The internal processing is strong, with n-key rollover.

One thing's for sure, though, and that's that the Aukey MK-G6’s switches are heavy. It’s not immediately obvious. The strength of its springs didn't really register with me initially. But it's very hard to actuate the keys with a resting hand, and after protracted play my hands were pretty tired.

It's also worth noting that I did notice a slight desynchronization between actuation and click. It's entirely possible to hold the KM-G6's switches below the click point and actuate them in only that downstroke space. Depending on the height of your typing, this may make a difference.

There are some pretty nice lighting effects to choose from, some static and some reactive to your key presses. This is a keyboard with LEDs in it. It is not, though, a keyboard with RGB LEDs in it. There are red, blue, green, pink and purple LEDs. Each row of keys has its own permanent color, with the home and space rows sharing the same red hue.

If you want proper RGB, you'll need to opt for the somewhat pricier KM-G3($65 at the time of writing), if it's available in your country.

Shine-through on the keys is reasonable, if a little patchy. The LEDs are mounted towards the upper edge of the key switch deep within the base and, while the switch base is transparent, the opaque core does mean that the bottom-most legends on the caps are noticeably dimmer than those in line with the lights, particularly when the lights have been lowered somewhat. And let's not mince words here: this is one gaudy color combination. It's lines of primary color obviously designed to give the impression of RGB without actually offering it.

There's no software with this keyboard. It's all on-board, customizable with Fn combinations. I didn't have any trouble setting up custom lighting effects, but it does preclude any macro functionality that you don't set up yourself. There are a couple of neat reactive effects too, some animated options, built-in lighting layouts for a few different kinds of games and a pair of custom profiles which store themselves on board.

What's most surprising about the Aukey KM-G6 is that I don't 100% hate the way it feels. This is, after all, a keyboard that costs as little as one-fifth of some of its rivals, which is a massive plus, on top of that there's so much it does right. It's plenty sturdy, all of the controls are on-board and it does make a great sound while typing. That Aukey has been able to do this on such a budget is absolutely commendable.

However, its switch feel varies wildly, and it's tiring on the fingers over time, but the KM-G6 is to the high-end mechanical market as the Happy Meal is to a five-course gourmet dining experience. It's cheap, it's easy and it gets the job done.