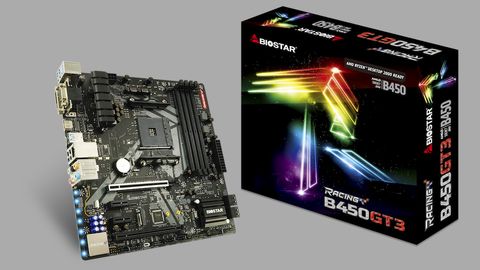 We take great efforts to make sure every board is benchmarked under the same CPU and DRAM conditions, including the disabling of any automatic overclock, enabling of power-saving features, and reliance on our DRAM’s DDR4-2400 SPD values. Overclock settings and XMP use are limited to our overclocking section.

Our efforts to normalize testing pay off in virtually flat results across our synthetic tests, where the biggest difference seen is in the Fatal1ty B450 Gaming ITX/ac’s memory bandwidth. That difference is likely due to optimizations in advanced memory timings, which we leave set to “automatic” mode.

The ITX board’s better memory performance appears to pay off in slightly higher FPS in our lower Ashes test settings but strangely, not in the F1 2015 settings we normally rely upon to illustrate memory performance differentiation. The Racing B450GT3 wins there, but only by a trivial amount, and its Talos “High Quality” results are low enough to effectively crush any gains it would show in performance averages.

The only things that really stand out in our timed workloads are the X470 Aorus Gaming 7 WiFi’s longer MS Word and shorter PowerPoint executions. And even those differences are opposite enough to effectively cancel each other out of performance averages.

Biostar’s Racing B450GT3 scales back to 3.70GHz under Prime95 small-FFTs, and while that didn’t show up as a performance deficit, it will give the board a lead in efficiency.

We began scanning our voltage regulators for hot spots after testing all the others, so our Voltage Regulator temperatures should be taken with a grain of salt. The average temperature at the place where we used to put our thermistor was approximately 21° lower than the peak temperature shown, which makes this at least the second hottest board even when using the old test method.

The B450GT3’s performance level was 0.4 percent above-average, which isn’t much to talk about, but its power throttling brought average power readings to 11.2 percent below-average for a 13.1 percent efficiency gain. We would have loved to have disabled B450GT3 throttling altogether to make this chart fair, but its voltage regulator was so hot at stock settings that we may have damaged the board before concluding these tests.

Adding a 58CFM fan over the voltage regulator of every board during our O/C tests, the above-mentioned issue vanishes to allow full stress testing at 4.30 GHz. The two boards that got us there were both Biostar products, the Racing B450GT3 and X470GT8.

While the X470GT8 was tested long ago with older firmware that didn’t respond well to our DRAM overclocking efforts, the B450GT3 pushed our DRAM to the board’s DDR4-3333 setting. Other boards went a notch or two higher to DDR4-3466 or DDR4-3600, and the X470 Aorus Gaming 7 WiFi even held a stable DDR4-3733 setting with all four modules installed.

Performance gain is the impetus for overclocking, and the Racing B450GT3’s four-DIMM results exceed those of the pricier X470 Taichi Ultimate. This was the X470GT8’s sole shortcoming, and while it may have been addressed post-review, giving every board a second test would severely cut down on the number of reviews we could produce.

The Biostar Racing B450GT3 is a nice, solid board that’s a little light on features and really needs a fan over the voltage regulator to get the impressive overclocking results its technically capable of. Since we always use a voltage regulator fan when overclocking, that wasn’t a major test concern. But if you’re looking to replicate our results, know that a fan is necessary.

The biggest remaining concern is availability and its impact on pricing: We’ve seen the full ATX X470GT8 for as little as $154, and when we started this review the Micro ATX Racing B450GT3 sold for roughly the same price. As we considered that the X470GT8 is in a far higher feature class and that Micro ATX is supposed to be cheaper than ATX, we were’n’t too surprised to see the B450TGT3’s price drop below $100. That’s low enough to give it a win, regardless of how light its feature set is. But we’d only opt for this board if its price stays close to the $100 mark. Much more than that, and you can find more robust options in the X470 realm.