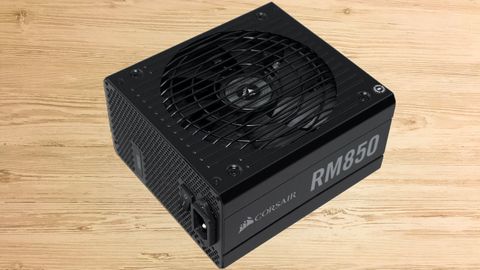 One of the most popular lines in Corsair's portfolio of PSU products is the RMx, so it was only natural for the company to try to replicate this success with another line, which will address lower budgets. The RM850 has 2.53% lower overall performance than its more expensive brother, the RM850x, but that doesn't mean that it doesn't perform well. On the contrary, its performance is pretty good in almost all areas and, on top of that, it has amazingly high efficiency levels under super-light loads. This unit is also compatible with Microsoft's new sleep states so it can reliably wake up a PC that it is equipped with a compatible mainboard, in less than five seconds. Corsair's people stated that they conducted tests using the RM850 along with new mainboards supporting the Modern Standby function and everything rolled fine.

To keep the price levels lower than the RM850x, although the MSRP is still a bit on the high side, the RM850 uses slightly lower-quality parts. Its Chinese Elite caps are a solid choice when you need reliability, but you cannot afford Japanese or at least good Teapo caps. The cooling fan uses a rifle bearing and most likely most users won't notice the difference with Corsair's trusty NR135L fan. Nonetheless, we would highly prefer the NR135L since it proved to be bulletproof.

In order for the RM850 to claim a big part of the sales pie and not remain in the RM850x's shadow, its price has to be notably lower (>10 bucks/pounds). The $119 (£109.99 in the UK) doesn't sound promising since the RM850x is currently sold at this price level, but usually the MSRP is notably higher than the actual street price and hopefully this will be the case for the RM850. The strongest competitors of the RM850, besides the RM850x, are the similar capacity Seasonic Focus Plus Gold which achieves a high performance per buck/pound ratio and the EVGA 850 G+, which currently costs less than $100 (£78.6) in the US. The RM850 will have strong competition to face, so a good pricing scheme is required to help it meet the competition effectively.

Prev Page Performance, Noise and Efficiency
Be In the Know