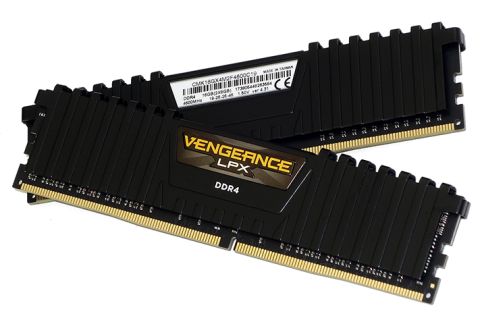 We began testing by first establishing the lowest stable timings for each module set. The MSI Z370I Gaming Pro Carbon AC supported tighter latencies than some previous boards, but often required a higher command rate. The G.Skill modules worked at either 15-16-16-32 timings at 1T or 14-14-14-28 timings at 2T, and our tests showed that it performed better at the lower latencies despite the higher command rate.

I added DDR4-4000 to today’s test, since three of the four modules supported it. And, since I’m shooting for DDR4-4600 in the O/C test, I also increased the latency ceiling to CAS 23. For the manual overclocking test, I decided to adhere to Intel’s stated 1.35V limit.

Surprisingly, the G.Skill DDR4-3866 and the Corsair DDR4-4600 both reached the same DDR4-4267 data rate when limited to 1.35V. Loosened timings allow the G.Skill modules to exceed the data rate found in the motherboard’s test, and I also found no overclocking benefit to setting the CAS Latency higher than 21-cycles.

The Vengeance LPX DDR4-4600 produced higher bandwidth at DDR4-4000 C18 than at its XMP rating, but part of that could be due to the file sizes Sandra uses during this measurement. Sandra Memory Bandwidth is affected by latency, so let’s see what’s going on there.

CAS latency is measured in cycles, and the cycle time is shorter at higher frequencies, yet the DDR4-4600 could use far fewer latency cycles at the reduced data rate. All three of the super fast memory kits reached their best combination of cycle time vs latency cycles at DDR4-4000.

Get ready for a big surprise! Our analysis of dual-rank DIMMs showed that Intel’s mainstream platforms work best with at least four ranks employed, and that getting there required either four single-rank or two dual-rank DIMMs. F1 2015 is known for being bottlenecked by both the CPU and RAM, so increasing the CPU clock to 4.80 GHz in today’s test allowed the four-rank advantage of two dual-rank DIMMs to be excessively pronounced. It gets worse for the single-rank pairs when I look at my notes and find that, at DDR4-3200, the minimums were 71.4, 77.5, 86.6, and 113.0 FPS, in that order, for the four sets shown.

We saw in a prior review that extremely bad memory timings can cause noticeable differences in Metro Last Light, but those extremes don’t exist when all four of these kits are optimized.

What I said about Metro also applies to Blender. Both applications are retained in memory evaluations because they’re real-world indicators of how a wide variety of applications respond to only the most drastic changes in memory performance. To wit: These apps help us maintain a real-world perspective.

Remembering that less is more when it comes to task completion times, a pair of dual-rank DDR4-3000 cleans the floor with its single-rank modules at most data rates. Data rate still helps though, as illustrated in the difference between that set’s default DDR4-3000 performance and its DDR4-3200 overclocked performance.

Bragging rights appear to be the primary reason people pay big bucks for DDR4 tested beyond 4000MT/s, so the value chart really doesn’t apply. On the other hand, people looking for the best performance per dollar can use it as a club against braggarts.