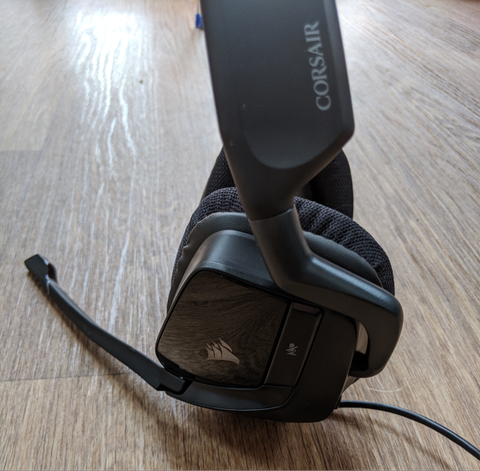 The good definitely outweighs the bad in the Void RGB Elite USB, but it's a shame we couldn't find a snug fit that produced an audio response sounding as Corsair obviously intended.

If you don't have 'pro' and/ or 'elite' in your product name, are you even a gaming headset? While not the best gaming headset overall, the Corsair Void RGB Elite USB (MSRP of $80/£70 and sale price of $50 at the time of publishing) for PC with virtual 7.1 surround sound checks off that box and also brings with subtle changes over its predecessor.

It all comes down to a new set of 50mm drivers that extend the frequency response range from the usual 20KHz you'll find on most gaming headset spec sheets up to 30KHz. That's well beyond what even the best human ears can hear, but that doesn't mean it can't augment the sounds we do hear. There's also a new Discord-certified mic with increased sensitivity versus previous Void models.

The Void RGB Elite USB is one of two new Void models, the other being the Corsair Void RGB Elite Wireless  ($100 MSRP,  available for $80 at the time of publishing).

Both model's are available in white, or the more traditional carbon all-black finish, like our review unit. For that mid-range price point you wouldn't expect much in the way of extras, and your expectations would be correct. The package contains just the headset itself and an optional foam cover for the mic, which I didn't find necessary during my testing. Just because it doesn't shower you in added goodies when you crack open the box doesn't mean it's lacking anything, however. It's comfort and sound that matter.

Our review subject carries over various design choices of earlier models from Corsair's Void line. That includes a broad aluminum headband covered in lightweight plastic that's angled to sit slightly further forward on the head than that of most other gaming headsets. The headband's finished to a nice matte effect, and there are markers on the adjustable section so that you can make sure it's evenly adjusted. On the underside, a huge chunk of exceptionally soft memory foam cushions the band against your head, and it's finished in the same breathable microfiber cloth material found around the earcups. There's a good degree of difference between the smallest and biggest setting on the headband, so no worries for those with exceptional cranial volume or svelteness.

Corsair really knows how to nail the grown-up aesthetic, and it demonstrates it with this model, keeping the branding relatively restrained with a light gray 'Corsair' offset on one side of the headband and a brand logo in the middle of each earcup. These logos are also RGB zones and cycle through the gamut of colors by default. You can, of course, use Corsair's iCUE software to customize the lighting if you wish.

There's another lighting area in a small band around the mic that pulses red when muted, and the mic arm is on a hinge that can be pushed up out of the way if you don't feel like talking. However, it's plenty long enough to place properly when you do want it, and it stays roughly in place once you bend the rubberized arm to taste. I prefer detachable mics and thinner designs that hold their shape more accurately, but the mic's more than good enough to work well at range if it should happen to slip away from you (we'll get into that later).

Around the earcups are two gloss areas where the RGB brand logos live, and there's a matte plastic accent running along the outer edge

The left earcup features the mic mute button, but I'm displeased with its placement, since it can easily be hit accidentally when putting on or taking off the headset. Luckily, there's that light band.

The corner of the left cup also features a volume control, which looks like a scroll wheel but behaves like a sprung switch. It's easy to make precise adjustments with, and even though users accustomed to wheels will have to adjust, it's a superior design overall.

At 0.9 pounds (390g) this headset's on the heavier side. As with previous Void models though, it distributes its weight well and doesn't dig in across the head or around the ears. The trade-off here is that since the fit isn't that snug, the headset can move around more easily on your head. Particularly if you get a bit, well, let's say animated when you get that clutch kill or earn a chicken dinner.

The cloth fabric around the earcups provide betters temperature control than leather or leatherette, so these are well-suited to gamers in hotter climates or who tend to heat up when gaming. That material's not so good at sound leakage, however. In addition to output being audible to anyone around you, that also means a detriment to the audio quality that you yourself hear. There's a bigger problem relating to the fit and its effect on tone, though.

On my head, the Void RGB Elite USB tends to flare out at the bottom, meaning they're much less snug around the bottom of my ears than the top of them. It can be mitigated by adjusting the headband for a looser overall fit, but it doesn't eradicate the problem completely. And that problem is all about the bass.

On a leaky headset, the bass is always in danger of sounding loose and lacking warmth, because those lower, longer frequencies are escaping out beyond the earcup instead of sounding out in a sealed chamber around your ear. That's especially important since Corsair markets these new Elite cans' 50mm drivers as having more powerful bass than ever.

The headset also offers virtual 7.1 surround sound; although, this isn't typically something we get excited for, due to its artificial-sounding nature.

When I pushed the earcups tightly into my head, I could hear what this model's supposed to sound like, and it's a great tone for a midrange product like this. The bass is powerful but matched by overall presence. But when wearing the headset normally, I experienced the flaring effect. It's important to note that while this was my experience with my smaller-sized head, your experience may differ, depending on the size and shape of your own cranium. Those fearing a similar flared fit might be better served by the much cheaper Corsair HS50, which has a rounder earcup design that provides a more snug fit on smaller heads, and the sound quality's pretty comparable.

In much brighter news, that new Discord-certified mic is straight-up excellent, with a better-rounded low-end response than older Void models and most of today's competitors too.

You get a warmth here that's not quite up there with dedicated USB mics, but certainly knocking on their door. It's vastly overqualified for play-calling in games and chatting nonsense over Discord, but having vastly overqualified gear for the task is what PC gaming's all about.

Corsair's iCUE is one of the most feature-rich peripheral software programs out there. Although we've experienced technical hiccups, like issues saving and applying audio profiles or products simply ceasing to work after a firmware update, using this software with other models, there was no such drama during my testing of the Void RGB Elite USB.

It's literally three clicks' worth of work to tweak RGB lighting of the logos. iCUE also comes pre-loaded with EQ presets ready to try out. Every now and then I found a profile being useful for a certain game. Virtual 7.1 surround sound  can also easily be disabled or - if you're feeling especially brave - enabled, right from the main menu.

Things are heating up in the midrange headset market, ironically enough, thanks to the Corsair Void RGB Elite USB.

I had some issues getting a snug fit with my smaller head, which affected overall sound, but there's plenty else to entice gamers shopping around at the sub-$100 point. That's especially considering the headset is enjoying a Black Friday deal that puts it at $50, which $30 under MSRP. But if you have a small head and don't feel experimenting, we recommend taking a look at the cheaper Corsair HS50.

Smart looks, restrained RGB implementation, a fantastic mic and generous padding all add up to a tempting wired proposition. You just may want to try it on for size before completely committing.