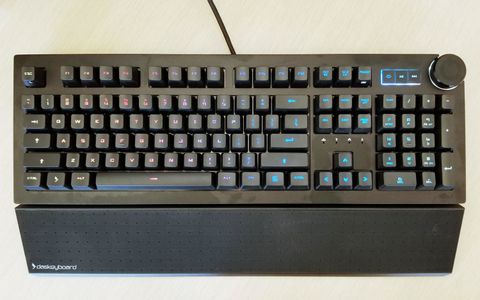 Das Keyboard’s long-awaited, web-connected 5Q is a solid mechanical keyboard with stable software. But we’re not convinced blinking keys are the best (or even a great) way to get notifications.

Are you eager for a new way to get notifications? Do you yearn for an alternative to the smartwatch? Does Chrome’s placement of notifications in the Windows 10 Action center not give you the notification fix you crave? Do you wish you could get notifications somewhere other than on the screens you spend all day staring at? And are you also in the market for an expensive mechanical keyboard?

If that sounds like you, Das Keyboard has a couple of clackers that might be worth considering. Both feature per-key RGB backlighting and Omron-made Gamma Zulu soft tactile switches (similar to Cherry MX Brown).

The 5Q we’re focusing on here (above) has a $249 MSRP and sports a sort of general-purpose design with a big tactile volume knob and media buttons, while the X50Q (below) is more gaming-focused, ditching the big knob and media controls and shaving $50 off the price ($199).

Both are solid keyboards, as should be no surprise given the fact that Das Keyboard’s parent company Metadot has been churning out premium mechanicals since 2005. But the primary selling point of these two models is their “cloud-connected” nature, which lets you receive notifications for just about anything (with the help of IFTTT and a few other services) via blinking, flashing, or color-changing key lighting.

Whether or not that’s actually a useful way of receiving notifications depends, to some degree, on preference. But if you’re a touch typist who spends the vast majority of your time staring at your monitor and not your keys, there are probably better ways to get alerts. And if you aren’t super-excited about getting notifications via blinking keys, there are similarly solid keyboards available for a lot less money. Corsair’s Strafe RGB MK.2, for instance, has bright key lighting (along with a trip of accent lighting on each side), good software, better media keys and sells for less than $150.

Let’s tackle the hardware angle first, since it’s fairly straightforward. Both keyboards support full n-key rollover with 100 percent anti-ghosting. Using this rollover test page, we were able to mash well over 20 keys on the 5Q without noticing any missed or erroneously triggered key presses. So gamers with fast and nimble fingers shouldn’t have anything to worry about here.

Both the 5Q and the X50Q have black metal base plates and feel very solid. But the X50Q adds some gamer-centric edginess with exposed screws and a reflective white surface behind the keys. The latter helps light escape from below the keys for a more noticeable glow, while its absence on the 5Q means light really only shines through the key's letters. This is bad because it makes notifications assigned to your keys (the whole point of this keyboard, really) hard to see unless you’re sitting right in front of the keyboard. That said, the RGB backlight has 10 different levels (plus off) and gets bright enough that it was easy to see in our sunlit office.

Adjusting that brightness on the 5Q is accomplished via a square button above the number pad, where you’ll also find a play/pause and an advance button for media playback.

While these keys are slightly concave, which helps you differentiate them by feel, we wish they were bigger and more tactile, like those found on various Corsair keyboards.

The volume knob that sits to the right of the media controls is quite large with a soft-but-tactile ratcheting feel as you adjust it, and it sticks out of the top-right side of the keyboard, so you can adjust it from the side. This knob also doubles as the “Q Button,” which is how you access the keyboard’s primary differentiating feature.

When pressed, this button launches the company’s [Q] software, which you’ll use to set up and investigate notifications, as well as adjust settings and modes for the RGB lighting. More on this later.

Both keyboards also ship with wrist rests, and while the 5Q’s attaches easily with the help of magnets and feels good thanks to some textured, soft-touch plastic, the X50Q’s wrist rest straps in via plastic tabs and feels cheap--especially for something that ships with a $200 keyboard.

Both keyboards have 6.5-foot braided USB cables. But there are no pass-throughs for USB or audio. On the upside, that means there’s a single USB plug to connect when you reach around behind your PC to install it rather than the dual plugs found with many mechanicals.

The Gamma Zulu switches (an exclusive to Das Keyboards) feel pretty good if you like the feel of Cherry’s MX Brown switches, and they’re rated to 100 million keystrokes. Note, though, that the switches use non-standard anchors for the keycaps. So don’t expect to be able to replace the keycaps with third-party alternatives. The gaming-centric X50Q model at least comes with a set of silver plastic WASD keys.

The Gamma Zulu switches are advertised as having a short, 1.5mm of travel, which the company claims results in faster spring back. But if travel differences of a millimeter or two make a serious difference in your gaming performance, well, you’re a better gamer than we are.

The switches also feel similar to those we’ve used on Logitech keyboards, which shouldn’t be a surprise considering Omron makes both Logitech’s Romer G switches and the Gamma Zulus in these Das Keyboards.

The free Das Keyboard [Q] software (Windows only, at least for now) is where you go to configure both the lighting and notifications for the 5Q and X50Q. While its design isn’t overly complicated, it’s fairly intuitively laid out. And in our testing, it was as stable as granite bedrock.
We never once saw a crash or an instance where the app failed to do what we told it. That’s very often not the case when a company known for hardware churns out a piece of software. But Das Keyboard’s parent company, Metadot, also owns a couple of software-based brands, so perhaps this solid software shouldn’t be surprising. The one thing we’d like to see in the software that we didn’t is a back button.

Upon first plugging in your keyboard and launching the app, you’ll be presented with a brief video explaining the notification possibilities with [Q], which are rather vast as the software works with the popular IFTTT platform, as well as Zapier and other unnamed “open APIs.” With IFTTT in particular, you can create a notification for just about anything that pings the Internet. First though, let’s talk about the lighting configuration options.

As with the notifications options, which we’ll get to shortly, there are several RGB lighting profiles, from rainbows and solid colors to layouts for popular software like AutoCad and Photoshop, as well as games like League of Legends and Counterstrike.

You can also make your own presets and choose color and/or effects for each individual key. There isn’t quite the level of customizability and sharaebility that you can find with Corsair’s keyboard software, but Das Keyboard more than covers the basics here--especially if your interest leans more toward productivity than detailed game customizations or complex animations. The [Q] software takes a sort of function-over-flash approach that’s also been a hallmark of the company’s keyboard hardware for well over a decade.

On the notifications front, when we wrote this, there were close to 75 presets available in the Signal Center section of the app, from Nest Cam motion detection alerts to, oddly, tracking whether your BMW is home or in a particular area. There’s also one for coffee, but of course you need a connected coffee machine to interact with the software and alert you when your caffeine buzz is ready and waiting.

You can, of course, create your own notifications using a number of services and APIs, although the software defaults to IFTTT. And as we covered in the section about lighting, you can set any notification to any standard keyboard key and choose a color and a lighting effect (blink, breathe, or color cycle) for your notification.

When you get one of these notifications, your assigned key will light up, change color and/or flash in the manner in which you’ve programmed it. If the notification is tied to content on the web (say, a new YouTube video from a channel you follow, a Twitch stream, or a news story), you can mash the big volume wheel/ Q button in the upper right of the keyboard to bring up the Signal Center for more details or links.

Do You Need Keyboard Notifications?

The company even offers up tutorial videos to help users create notifications using IFTTT and Zapier. There’s a surprising amount of polish here for an ecosystem designed around a pair of keyboards.

We just can’t help but to keep returning to the notion that many (if not most) notifications bring you back to your monitor for more details anyway. Most people also spend much more time staring at their monitor and smartphone than their keyboard keys. And a screen is just a fundamentally better place to get notifications than on the keys of a keyboard.

Other examples Das Keyboard gives for potentially useful notifications are weather alerts (which essentially involve assigning a different key to each common weather type), or tracking whether a specific stock is up or down. But the simple fact is that many things you might want notifications about are more complicated than what can be conveyed by a single key. That’s why notifications on phones and PCs usually involve text.

You could certainly argue that it’s easy for the notifications in your browser and on your phone to become overwhelming, and getting a few notifications on your keyboard could be a way of breaking through the notification noise. But that could also be accomplished by taking some time to disable the many notifications that you’ve probably accumulated over the months and years that you no longer need or never actually wanted in the first place.

If you set up several notifications on your [Q]-enabled Das Keyboard, you could also wind up with the same overwhelming situation of too many blinking, color-cycling key notifications. Some of those (particularly notifications that don’t happen often) you might not even recall the meaning of without digging into details in the [Q] software. And that software is, again, on the screen that you’re almost certainly going to spend more time looking at than your keyboard.

The alerts system works very well, and if there’s a specific reason you need to get these notifications on your keyboard, the Das Keyboard 5Q may be worth your while. It’s certainly a very solid (if expensive) keyboard, and the software used for creating notifications is surprisingly intuitive and stable. If you just want a high-quality gaming keyboard with a good feel that does not offer alerts, consider a the Corsair Strafe RGB MK.2. However, if you can afford the premium and are excited about the possibilities of keyboard-based notifications, the Das Keyboard 5Q offers a truly unique experience.