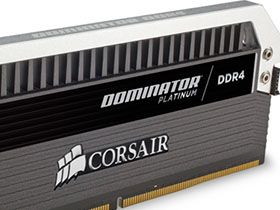 The magic of Photoshop allows me to combine the important adjustments from several firmware pages in a single screen shot. In order to retain DDR4-2800 XMP timings, my first step was to drop the CPU strap to 100MHz (which is actually a 1.0x internal multiplier); the motherboard responded by resetting BCLK to 100.

A 1.20V fixed core voltage keeps the CPU stable at 4GHz, and our voltmeter shows 1.35 to 1.36V using the motherboard’s 1.330V setting. Unchanged from previous reviews, this is the first time I’ve had an excuse to put these voltage settings in a screenshot.

Our previous DDR4 comparison provided full details of my current test platform, which includes a six-core CPU capable of reaching a 132MHz BCLK. Depending on your perspective, that could be a problem. With the unsanctioned 26x DRAM data rate multiplier less stable than the Intel-sanctioned 26.66x, the next step up from 24 x 132MHz data rate (DDR4-3168) becomes 26.66 x 125MHz (DDR4-3333).

A method Asus had grilled me for in past DRAM tests, I set DDR4-3333 settings and then clocked the CPU down from 125 to 122MHz, thereby finding Corsair’s actual limit of DDR4-3254. Now I just have to pucker up for another four-hour sit-down with Asus…

My little taste of freedom wasn’t as great a benefit to Corsair as I’d initially thought, though. After all, my original G.Skill kit reached 3306MT/s at a 124MHz BCLK. With hope for an even better-overclocking reference kit officially dashed, it’s time to look instead for a performance advantage through timings optimization.

Given primary timings that track Kingston’s “improved-value” DDR4-3000, Corsair Dominator Platinum DDR4-2800 lags about one cycle behind my old G.Skill test kit. That stability limit could be due to tighter secondary timings though, so let’s take a look at the performance picture.

Don’t see DDR4-2800 in the chart? That XMP value is found exclusively under the “Rated Data Rate, Rated Timings” of Corsair’s Dominator Platinum. Rated at DDR4-3000, the other kits use a higher data rate to generate more bandwidth.

All of these kits have tighter timings at DDR4-2133 SPD values, so I use those when testing at 2133 and 2400MT/s data rates. Corsair edges out Kingston there, but still lags slightly behind my old G.Skill test kit.

Lower is better when it comes to latency, and Corsair edges out Kingston again. Unfortunately, I still haven’t found what I’m looking for in a replacement of my old G.Skill kit.

Prev Page The Hunt For Faster RAM Continues Next Page Real World Benchmarks, Value And Recommendations
27 Comments Comment from the forums
Be In the Know