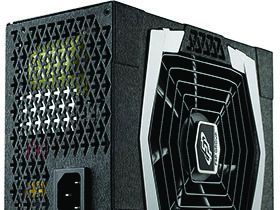 Using the results from the previous page, we plotted a chart showing the efficiency of the PT-1000FM at low loads and at loads equal to 10 to 110 percent of the PSU's maximum rated capacity.

With normal loads, the PT-1000FM took first place in the efficiency tests, performing better than Seasonic's top Platinum-rated platform (XP3). At light loads, FSP's design managed to stay close to the top, with a small difference between Seasonic's Gold Platform that the Cooler Master V1000 uses. Once more, the FSP PSU managed to surpass the Snow Silent 1050, which is considered one of the best PSUs in its category and a direct opponent to the PT-1000FM.

In the next tests, we measure the efficiency of the PT-1000FM at loads significantly lower than 10 percent of the device's maximum capacity (the lowest load the 80 PLUS standard measures). The loads we dialed were 20, 40, 60 and 80W. This is important for representing when a PC is idle with power-saving features turned on.

At low loads, efficiency stayed at good levels, with two of the four readings coming well above the 80 percent mark. Considering that this is a high-wattage platform, we cannot demand more of it at such light loads.

The 5VSB rail wasn't very efficient, despite the MOSFET that it uses for regulation. As a result, the PSU lags behind its competition in this test. FSP should improve this rail to bring it closer to the performance of the other rails.

Phantom power is very low on this unit, which will save your wallet and also protect the environment, since less energy goes to waste.

The following chart illustrates the cooling fan's speed (RPMs) and the delta between input and output temperature. The results were obtained at 35 to 48 °C ambient temperature.

The next chart shows the cooling fan's speed (RPMs) and output noise. We measured acoustics from one meter away, inside a small, custom-made anechoic chamber with internals completely covered in soundproofing material (be quiet! Noise Absorber kit). Background noise inside the anechoic chamber was below 18 dB(A) during testing, and the results were obtained with the PSU operating at 35 to 48 °C ambient temperature.

The following graph illustrates the fan's output noise over the entire operating range of the PSU. The same conditions of the above graph apply to our measurements, though the ambient temperature was between 28 and 30 °C.

The fan operates at 900 RPM throughout most of the PSU's range. At around 750 to 900W, output noise increases significantly, exceeding 40 dB(A). Close to full load it reaches 50 dB(A), meaning that it will be annoying even to those who are not sensitive to noise. However, you shouldn't expect a 1kW unit to be silent under full load since even a highly efficient unit like the PT1000-FM will still have significant heat to deal with.

In general, this is a quiet PSU given its high wattage. But we believe that if FSP offered a semi-passive mode, the final result would have been much better since overall output noise would be significantly reduced. If FSP didn't want to mess with the semi-passive mode, it should at least lower the minimum fan speed. At 900 RPM, it's still pretty aggressive.

Prev Page Load Regulation, Hold-Up Time And Inrush Current Next Page Cross-Load Tests And Infrared Images
4 Comments Comment from the forums
Be In the Know