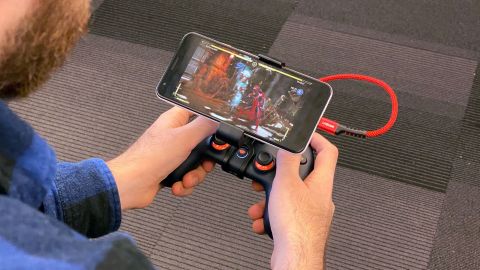 Google Stadia loads games instantly and has a great controller, but its library is lacking and features are missing, so you should wait.

But in practice, it’s not there yet. Google Stadia will evolve over months and years, but at the moment, it’s too barebones to recommend paying for. The library isn’t impressive, and a lot of promised features just aren’t there yet.

The idea is that Stadia should be easy. In practice, it takes a bit of work to get there. Currently, you need two things to set up Stadia: a Stadia and a Chromecast streaming device. Both of these, as of this writing, come in the Google Stadia Founder’s Edition. (If you ordered just the controller, you’ll need to wait for a Chromecast update.)

You need to set up the Stadia with Chromecast first, but then you can take it anywhere, including your web browser on a laptop or desktop or on a mobile app on select Android phones (iOS is not yet supported).

Right now, the only subscription plan is the $9.99 Stadia Pro tier, which goes up to 4K resolution and a frame rate of 60 frames per second (this is, of course, based on your connection), occasional free games and discounts. A free model will come next year and will only go up to 1080p resolution with no free titles or cut prices.

The Stadia controller on its own is $69.99. There's also the Stadia Premiere Edition bundle for $129.99 that includes a controller, a Chromecast Ultra and three months of Stadia Pro.

Right before launch, Google bumped the number of games at launch to 22 titles. More games are planned for 2019 and into 2020. You have to pay for these games, so this isn’t a subscription service like Netflix or Disney+. And that’s on top of the $10 a month until the free tier comes out.

I got to try a small smattering of them, including Destiny 2, Shadow of the Tomb Raider, Gylt (a Stadia exclusive), Mortal Kombat 11, Kine and Red Dead Redemption 2.

Some of the features originally announced, however, aren’t here yet. That includes achievements, State Share (to share in-game experiences via links) and Crowd Play for YouTube Streamers to play online with their audiences. While Stadia was announced as a platform for streaming and sharing, right now it’s just one for gaming.

Additionally, Stadia doesn’t have 4K, HDR or 5.1 surround sound on the Chrome browser at launch. These are only available via Chromecast currently. The Stadia controller is required for Chromecast and needs a wired connection to mobile phones. Other controllers, like an Xbox One controller, Sony’s DualShock 4 or even a keyboard and mouse, work on certain platforms, but they mix and match at the moment. Not every platform works with every controller.

There are some other minor issues. For instance, at launch, you can’t use Google Assistant and you can’t take screenshots with the Stadia controller in the Android app.

But the biggest question on everyone’s minds is how Stadia performs. What’s it like to play games coming from a data center rather than a PC or a console?

I played prior to consumer launch and found it to largely work quite well when I gamed with a Stadia controller on a Pixel 3a XL as well as on Chromecast. Performance was similar across both those and a Chrome browser on an old laptop.

For this review, I performed my testing in my small, New York City apartment, where I tend to get about 150 Mbps Internet speeds.

For games like Shadow of the Tomb Raider, Red Dead Redemption 2 and Gylt, third-person action adventure games like the ones I would play from a console on my couch, Stadia was sufficient. Generally, my connection was stable enough to play without issues. Once or twice the screen got scrambled over a weekend of play, but largely I felt as if I was playing on my PlayStation 4.

My only issues were on Destiny 2 and Mortal Kombat 11. These are the games that are played competitively and every second truly counts. And that’s where players may notice input lag. I had the chance to play Destiny 2 with others on a server, and while the connection was great and didn’t stutter once during my time in Gambit or the European Dead Zone, I occasionally noticed a small amount of time between moving my reticle and when it occurred. This is milliseconds, and I expect most players won’t notice.

In Mortal Kombat 11, the game did seem a few frames behind. It’s a fast-paced, fast-moving fighting title, where any time in between combos, blocks and attacks can be the difference between winning and defeat.

While my apartment is small, the bedroom is where Wi-Fi is the worst, and that’s where any input lag seemed to be most noticeable. For casual players, this type of performance will be acceptable. But for hardcore gamers, any input lag will be a considerable problem.

The Stadia controller is surprisingly comfortable. It’s rounded and curved and feels extremely natural in my hands. The buttons are clicky, and the triggers are smooth.

Google has opted for the PlayStation style of controller, with the two control sticks next to each other. I actually think the controller is far more comfortable than Sony’s DualShock 4. It also has Google’s playful look, and I honestly think this is the best piece of hardware Google has ever made.

If you’re a PC gamer, you’re used to having total control of your graphics options. That’s something you have to give up with Stadia. While each game has its own settings, they are more like the console version of what you’re playing.

There are some options to change it, but they’re based on data, not graphics. You can go for best visual quality, aiming for 4K, which can go up to 20GB per hour. “Balanced” mode chooses the best connection for your Internet speed, and a “limited data usage” mode caps data at 4.5GB per hour at 720p.

But here’s the rub. As of right now, only Stadia Pro is available, which allows up to 4K streaming at 60 fps. That’s based largely, however, on your connection. You can’t tell Google that you’d prefer performance over graphics performance.

The Limits of Streaming

As I tested Stadia, I couldn’t help but think of limitations for game streaming. What about people in much of America and the world who don’t have high speed broadband, like I do? I know people still on DSL. I know people who haven’t updated their routers since 802.11n.

There’s also the question of data caps over broadband. If you have one, you should take heed before streaming games at 4K for a few hours.

These aren’t Google’s fault. These are infrastructure problems, and competitors, like Microsoft’s Project xCloud, will also face them. But as one of the first out of the gate with a product that consumers pay for (PlayStation Now has been here for a while, but Nvidia's GeForce Now is still in beta, as is Project xCloud), potential customers will also need to confront them.

It’s a promising technology in many ways, including the way it eliminates barriers to gaming with the lack of installation times. But there’s a free tier coming, and if you’re not sure about your connection, it’s hard to swallow paying for the potential of 4K gaming. It’s also tough to justify paying $10 per month for the service as it stands and games ranging for $30 to $60 on top of it.

If you have a gaming PC and want to tinker with settings, Stadia isn’t for you (and may never be). If you have a console, you already have Stadia's lineup of games available to you, minus Gylt. However, console players wanting the flexibility to play on other devices may be swayed. But for now, both PCs and consoles are still superior, feature-filled options.

That may change. I suspect that game streaming will one day be a technology that is mainstream and used side-by-side with gaming PCs and consoles. But Google’s feature set, the stuff that makes Stadia most compelling, isn’t here yet.

But the service will evolve. Maybe one day it will be worth it. For now, Google Stadia needs more time in the oven before it’s worth trying out.