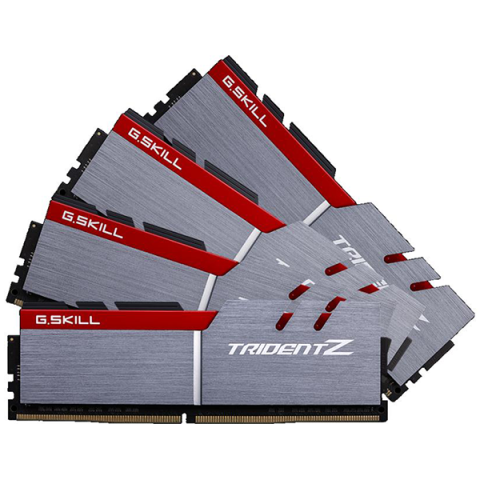 Though the firmware of Gigabyte's Z170X-Gaming G1 supports extreme data rates in both two-DIMM and four-DIMM configurations, it hasn't been stable at tRAS settings below 28 cycles. Even with that restriction, the board has allowed excellent bandwidth scaling based on adjustments of CAS Latency, tRCD/tRP, and Command Rate.

Sandra Memory Bandwidth actually increases for the 32GB kit in spite of its slightly-looser timings at DDR4-2666 and DDR4-2133. This usually occurs as a result of tighter secondary timings, which in turn limit overclocking, yet even Adata's 32GB DDR4-2400 is able to edge out the 16GB kits at these lower data rates.

Sandra Memory Latency favors the smaller kits, which also have tighter primary timings. So far, it looks like a toss-up.

Though the difference in games is too small to see in action, G.Skill's Trident Z 32GB pushes the highest average frame rate of the four test samples. We're talking bragging rights now.

The same Trident Z kit had the worst average completion time in 3ds Max, though it also ties for first in WinRAR compression. We're still talking about pure bragging rights without practical differences.

Corsair's Vengeance LPX comes with fans, driving its price up by around $50. As a result, the Trident Z 32GB kit offers more value-per-gigabyte on a raw basis. The only way it balances out in Corsair's favor is if you wanted the fans and you might want them if your combination of case and remote liquid cooler provide poor airflow at the top of the motherboard.

The net result of these tests and calculations is that Adata's DDR4-2400 32GB kit would get the value award if it were being reviewed today. The more-overclockable Trident Z DDR4-3200 32GB might also be suitable for an Editors' Choice award, except that if this editor were making his selection based on overclocking he would probably buy the DDR4-3400 version of this 32GB kit. G.Skill's F4-3200C16Q-32GTZ kit instead falls into this odd marketing niche of second-tier performance parts, and its lower $220 price at least allows it to get our general stamp of approval.