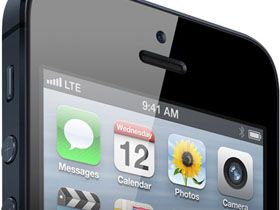 There are three certainties in life: death, taxes, and Apple hitting you up for another several hundred dollars to upgrade your cell phone. It's an event we've all come to expect, and it's always accompanied by speculation before and analysis after the company lifts its kimono.

The iPhone's technological progression has been fairly evolutionary. Over the past three years, the device hasn't really changed dramatically. Perhaps that makes the iPhone 5 more interesting than models past.

It is different inside and out. Perhaps that's just the nature of the smartphone business. We expect our phones to get smaller, thinner, and lighter. We haven't seen an iPhone do those things since the iPhone 4. Even then, though, Apple didn't make any dramatic changes.

The iPhone 5, on the other hand, actually looks like a different product. It’s still unmistakably an iPhone. But while the power and volume buttons, along with the vibrate toggle, are in their familiar locations, the iPhone 5 is taller than the iPhone 4S, along with thinner and lighter. The change in dimensions was made to accommodate a larger 4" LCD screen, up from 3.5". As a result, this is Apple's first phone with a native 16:9 aspect ratio. Its 1136x640 resolution is higher than the previous generation's 960x640.

What you really feel when you pick the iPhone 5 up, however, is the device's lighter weight. At only 112 g, Apple shaved off 20% of the iPhone 4S's bulk. In and of itself, that's not really a reason to buy a new phone, of course, but it's a significant achievement nevertheless.

The iPhone 4S sandwiches its internals between two aluminosilicate glass panels. The iPhone 5 achieves its thinner and lighter specifications, at least in part, through the use of an aluminum body.

In the days following the iPhone 5's retail introduction, though, many customers complained about how easy it is to chip the aluminum chassis' paint. According to Apple’s senior vice president of marketing, Phil Schiller, “Any aluminum product may scratch or chip with use, exposing its natural silver color. That is normal.” Truly, only Apple would have the stones to try calling its chipping paint normal wear. Proving how much more fragile the iPhone 5's body really is, our friends at iFixit even did a video where a two-year-old helped scrape quite a bit of paint from the device's back panel.

A few years ago, Steve Jobs remarked that “I think stainless steel looks beautiful when it wears.” Presumably, he was referring to patina, the tell-tale sign of use or oxidation that accumulates on certain metals. Silverware, for example, starts out really shiny, but takes on a warm, muted appearance over time. If you’re shopping for antiques, this is something that actually valued. If you still own a first-generation iPhone, it probably looks something like the picture above. The hard-anodized surface may have worn off, but fine surface scratches create a patina finish.

It takes years for this to happen, though, requiring repeated daily use. If you replace your phone every time you're eligible for an upgrade, you'll never see it. So, while Apple’s decision to paint its aluminum body is theoretically sound, we're concerned about how easily the iPhone 5 is scratched. Obviously, the solution is going to be to buy a case, though taking that step wasn't nearly as necessary before as it is now.

Next Page The Lightning Connector
65 Comments Comment from the forums