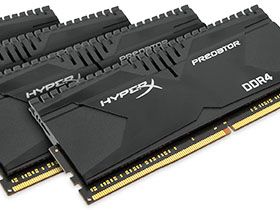 While we continue to use the best-of-the-best in our overclocking analysis, buyers looking for value in the DDR4-3000 market will be far happier with Kingston’s lower-priced HyperX Predator HX430C15PB2K4/16.

Enthusiast-Class DDR4 At The Same Speed And A Lower Price?

I’ve been using a single kit of DDR4-3000 to test the memory overclocking capabilities of various motherboards since Intel first launched its X99 platform. But is it time for a change? On one hand, getting more performance from lower-cost parts is part of the fun of overclocking. On the other, some enthusiasts are willing to lay down fat stacks of cash just to claim title to the world’s fastest personal computer. There are even power users jockeying for lower rungs on that ladder just to beat all of their friends.

From a reviewer’s perspective, Kingston’s HyperX Predator needs to be either faster than the part it replaces or just as fast, but cheaper, in order to justify its role as a replacement on my motherboard test bench. While faster is nice, I’m always anxious to find better value in less expensive parts that deliver comparable levels of performance, too.

A second XMP value could make it optimal for comparing alternative DDR4-2666, however, and that same DDR4-2666 CAS 14 value is particularly useful on motherboards unable to operate at DDR4-3000. That includes most of the boards we’ve tested to date. Still, we hold out hope that future firmware development paves the way for higher stable data rates.

Current page: Enthusiast-Class DDR4 At The Same Speed And A Lower Price?

Next Page Overclocking, Tuning, Bandwidth And Latency
15 Comments Comment from the forums
Be In the Know