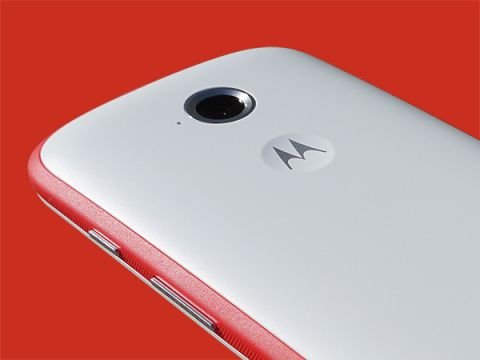 The Moto E (2nd gen) comes with a 4.5-inch IPS LCD screen that is slightly larger than the original Moto E’s screen; however, it retains the same qHD 960x540 resolution, giving it a pixel density of 245 PPI. While not high enough to qualify as a retina display, text is reasonably clear but pixels are still noticeable, giving the screen a slight grainy appearance.

Thanks to continuous advancements in display technology, displays for even low-end smartphones have become quite good. The new Moto E’s display has good viewing angles, with some shift in brightness but not color.

One thing that betrays the phone’s budget provenance is the rigidity of the screen, which, despite using Corning Gorilla Glass 3, bends when you press on it rather than feeling like hard glass as most smartphone screens do these days. This is reminiscent of the old days of resistive-type screens which actually needed some amount of pressure to work.

There’s also significantly higher friction when swiping on the screen compared to other devices, which can make some touch usage, such as scrolling, slower and less enjoyable.

We’re using SpectraCal's CalMAN software and SpectraCal C6 colorimeter for display measurements. All of the charts below with a gray background were generated in CalMAN v5 Ultimate.

The new Moto E gets reasonably bright, but falls shy of the 400 nit milestone and the Moto G (2nd gen). This makes the screen a little hard to see in direct sunlight. It does have a respectable black level, similar to the Moto G, giving it a decent contrast ratio that’s better than the higher priced Nokia Lumia 830.

The Moto E’s average gamma level of 2.22 comes very close to the ideal of 2.2, easily surpassing the Moto G and the more expensive Lumia 830 and HTC Desire Eye. However, gamma begins to rise at the 50% grayscale mark, eventually spiking to nearly 2.6 at 90% grayscale, leading to darker shadows and a loss of highlights.

Most mobile displays tend to show colors on the cool side of the color temperature spectrum and the Moto E is no exception. With an average color temperature just under 7,000K, and values even closer to the ideal as we move up the grayscale graph towards white, the Moto E avoids the blue tint that plagues other displays.

Checking the RGB balance confirms what we saw in the color temperature graph above. Most gray levels have slightly more blue content, with a bit more green at 100% (white). Still, these are good results, avoiding any noticeable color tinting except at the 100% white level.

Average grayscale ΔE2000 falls just above three, a value that’s noticeable but considered acceptable. It’s similar to Motorola’s Nexus 6 (3.02) and better than both the Moto G and LG G3 (4.02).

Grayscale error hovers around two over a wide range of grayscale values, but spikes near 100% white. This is because the Moto E’s display shifts towards green at this end of the spectrum.

The Moto E display does a good job covering the sRGB color space. Without an operating system or apps that support color management, there’s no need to support a wider gamut.

In the color saturation sweep, we see that red and blue seem to be somewhat undersaturated. In other words, the measured color falls short of each 20% box. We also see that the Moto E misses the blue corner of the sRGB triangle, unable to represent a true 100% blue.

In the color accuracy test, the Moto E does very well with an average error below three and a maximum error of 5.89 for white. This shows that the Moto E’s display was color calibrated and has a high degree of color accuracy, better than the Moto G and sitting between the Samsung Galaxy Note 4 (2.23) and the LG G3 (3.05).

The color palette above shows the target color on the bottom and the color displayed by the Moto E on top. We can see a slight green tint on the white swatch, as suggested in the grayscale tests. The Moto E’s 100% blue is also a bit light like we saw in the color saturation sweep. For most of the colors, however, the actual color and the target color are very close to each other.

For a lower-cost phone, the display in the Moto E (2nd gen) is actually very nice. We were surprised by how well calibrated the display is, easily beating the color accuracy of more expensive devices, including Motorola’s own Moto G (2nd gen) and Nexus 6. Our only complaints are that max brightness falls short of 400 nits and whites display with a slight greenish tint.

For the new Moto E, Motorola decided to remove the bottom-front speaker, either because the company did not want to pay double for the speakers or it was a design choice meant to streamline the device and make it slightly more compact. This does not seem to make a major impact on the loudness nor the clarity of the speaker compared to the Moto G which comes with two.

The external speaker on the Moto E (2nd gen) keeps distortion to a minimum at max volume. At normal listening levels, it’s still possible to hear individual notes and instruments when listening to heavy metal, but sounds start blending together with multi-layered electronic music, making it sound a bit garbled. Folk music, or music centered on vocals, plays to its strengths.

Bass notes, of course, are soft. With the EQ turned off, the midrange is strong, which is important for vocals or just listening to someone on a phone call, but trails off at higher frequencies. The “Brilliant” EQ setting sounds too tinny, but “Bass punch” helps shore up both the low and high ends a bit, and is probably the best setting.

Plugging in a set of good headphones provides a similar listening experience. Relative to the iPhone 6, bass has less punch and the Moto E lacks clarity; the signal-to-noise ratio seems lower.

Just like with the external speaker, vocals start blending together with instruments when listening to multi-layered electronic music. With the EQ turned off, the output sounds flat and lifeless. There’s no power behind the vocals and it’s just not really fun to listen to. Activating the “Home theater” EQ setting livens the sound up a bit, but the low-end has too much emphasis and sounds too rumbly. The “Live stage” EQ setting seems to be the best compromise, shoring up the bass and midrange without the rumbling heard with “Home theater.”

Overall, the sound is not bad for a phone in this price range. It’s certainly not fair to expect the same level of audio performance as an iPhone, Sony Z3, or Nexus 6. With some EQ help, the Moto E (2nd gen) provides an acceptable listening experience for casual use, but will not thrill music buffs.