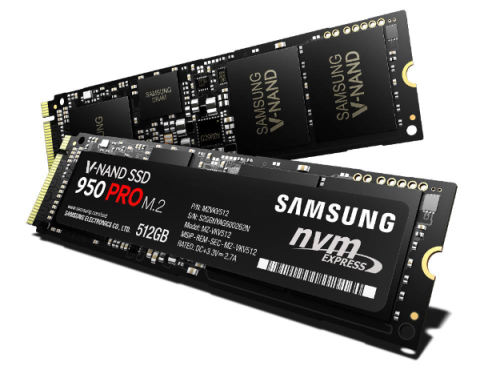 RAID is a touchy subject. Some people claim it doesn't improve performance and others swear by it. What really matters is your workload and the type of data you manipulate. Our results favor the 950 Pros in single-drive configurations because they utilize Samsung's NVMe driver. Once we finished our standard tests, we tried to force the array to use the same software, but were unsuccessful.

Remember back to our earlier results, where Samsung's 950 Pro demonstrated superior low queue depth performance compared to the competition. This set of tests, based on real-world software, shows how the extra bandwidth at low queue depths saves time. There isn't much separation to speak of, but the Adobe Photoshop Heavy benchmark shows how heavy loads are accelerated by higher-performing SSDs. The difference between Samsung's 512GB 950 Pro and 2TB 850 Pro is right around 11 seconds.

This graph's results are averaged and presented in terms of throughput (rather than time to completion). The 950 Pros dominate our light workloads. But can Samsung carry its momentum into the tests where heavy conditioning precedes the measurements?

It takes the 512GB 950 Pro to match the SSD 750's performance. RAID 0 helps under heavy steady state loads, but not as much as we expected. This is a result of the DMI's limited bandwidth, even though Intel just upgraded the interface to third-gen PCIe.

Up until now, nearly all of our tests favored the Samsung 950 Pro. Latency tests are arguably more important when you're looking for snappy responsiveness though, and Intel's SSD 750 takes this measurement by a comfortable margin. Samsung may have room to improve through firmware updates. Then again, the 2TB 850 Pro also has latency issues after heavy workloads, and that's a drive we'd expect to be mature. Samsung's 830 suffered similarly. The company changed some of its programming for the 840 family to eradicate that behavior, and we can only hope it'll do the same for its latest creation.

What you are seeing is garbage collection and wear-leveling utilizing the controller's resources. Some companies delay wear-leveling operations until the drive is idle. Others give priority to housekeeping activities. There are pros and cons to both approaches. Since the 950 Pro will invariably end up in enthusiast and workstation PCs, this is the method Samsung deemed best.

We expect Rapid Mode to make a big difference under normal workloads. The DRAM cache tiering feature is part of Samsung's Magician suite. Unfortunately, the newest version with support for the 950 Pro wasn't available when we wrote our review.