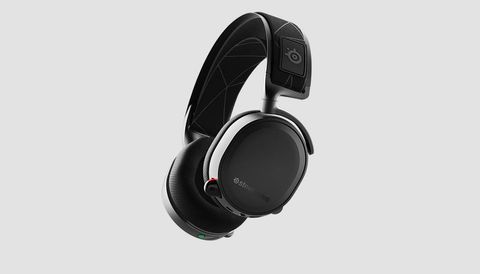 Established as the go-to wireless headset since its release, the Arctis 7 2019 Edition is still a supremely strong contender in an increasingly crowded cable-free market.

We really ought to roll out the red carpet for this one. SteelSeries’ Arctis 7 2019 Edition aims to be one of the best gaming headsets by hitting the sweet spot between price and performance. You don’t tend to see it around the necks of eSports athletes at major tournaments, but for enthusiasts who care about comfort as much as audio fidelity it’s long been a mainstay. With this 2019 edition of the Arctis 7, featuring a handful of subtle improvements, SteelSeries looks to extend that reign.

This is but one of a fleet of Arctis headsets united by a ski-goggle-style headband that keeps the weight of the unit from digging into your delicate cranium. It offers 2.4 GHz lossless wireless capability with up to 40 feet (12m) range. At the entry level, the Arctis 3 actually has plenty of similarities to this model, and, right up at the top of the range, the Arctis Pro Wireless feels and sounds pretty similar too. The differences are in specs and features, but however much money you spend, you're assured of a market-leading pair of cans.

The SteelSeries Arctic 7 2019 Edition hit the same price point as earlier Arctis models when we first reviewed it in August, when it was available for $129/£129. But now, courtesy of the best Black Friday tech deals, it's on sale for $100 at Amazon.

Most headphones use a lightweight metal or plastic headband to keep the unit on your head and press the earcups against your ears. The Arctis takes a different approach, instead suspending its 375g weight above your head with an elasticated band. The result isn't night and day but, rather, a sustained level of comfort that only makes itself evident as being superior after an hour or two of use. The only rival headset offering similar luxuriousness after long sessions is the HyperX Cloud Alpha, which takes the traditional headband design, as well as the earcups, and absolutely smothers it in memory foam. That works too, but the Arctis 7 is considerably more breathable than the Alpha, thanks to that elasticated headband and materials used at the contact points.

For the 2019 Edition, SteelSeries tweaked the headband and earpads. The headband's slightly more substantial than in older iterations, now matching that found in the pricier Arctis Pro headset. This didn't make a significant difference in terms of comfort. But it might slightly improve the durability, since one of the rare design pitfalls of this range is that the headbands tend to sag over time as they lose elasticity after months of solid use.

The earpads are thicker than before, and, again, while the effect is subtle at first, it's a long-term benefit because earpads lose their plumpness through repeated use over time. More than boosting your immediate comfort, that extra padding will keep the 2019 Edition feeling gentle and luxurious for longer.

What we absolutely love about the design of the Arctis 7 2019 is how intelligently its controls are laid out. The chat mix thumb wheel at the rear of the left earcup is a revelation, saving you from delving into in-game or Windows volume settings and bringing your buddies' dulcet tones up to the desired level effortlessly. A volume thumb wheel and mic mute button are also placed at the rear for easy access, while the mic is retractable. It's a no-fuss, elegant design, and we actually miss that chat mix wheel on other headsets we test now, including the more expensive Arctis Pro Wireless ($290/£280 at the time of writing), which migrates the feature onto a wireless receiver/control box.

Previous versions of the Arctis 7 sounded exceptional but tended to output on the quiet side. The Arctis 7 2019 Edition is noticeably louder, while retaining the character of previous models and keeping distortion at bay, even at high volumes.

The fact it manages such clarity and richness runs contrary to its appearance and the sensation of wearing it on your head. These don't look like audiophile headphones by any means, and the contact points aren't particularly snug. Ordinarily, you'd expect a washed out sound as a result of the audio output mixed with room noise leaking into the sound chamber. But despite sitting much looser than the Cloud Alpha there's no 'seashell effect' or audio leakage at play in the Arctis 7. That says a lot about these 40mm neodymium drivers.

The balance and clarity does come at the expense of a little weakness in the low end, but not to the extent that in-game ambiance or bass-heavy music felt lightweight. In our comparison tests, the audio response offered a less authoritative bass than wired audiophile headphones and the Cloud Alpha. That actually made the Arctis 7 very versatile and even suitable for soft-touch video editing and mixing tasks. But it also meant we lost a tiny bit of emotional response from rumbling low-end sound effects.

DTS Headphone:X v2.0 virtual surround technology powers the soundspace and made for an impressive stereo spread with a just barely perceptible ring of digital artifice. It didn't add anything to our music experience, since songs are almost always mixed in stereo and applying a surround space to them just ends up with muddiness. For gaming, it's a totally different matter, though, and provided an important extra level of precision to sound cues, like footsteps and grenade tosses.

Although it's not required to use the Arctis 7, SteelSeries Engine software offers the chance to tweak EQ profiles and create custom profiles for individual games. Boosting the high-mids (the fourth of the five-band EQ) generally boosts footstep noises in multiplayer titles, so Engine offers the chance to save a profile just for this. You can also tweak mic volume and toggle surround sound on or off.

We're not generally fans of any software layer like this. The upshot is either the feeling of being strong-armed into buying all peripherals from one brand for ease of use, or a suite of similar apps from different manufacturers to control your headset, keyboard and mouse. With that said, Engine keeps things simple and low-impact. The number of people who actually cycle between EQ profiles depending on their activities is debatable, but SteelSeries' software is lean and the UI is idiot-proof.

SteelSeries isn't rolling the dice with this refreshed Arctis 7, and you can hardly blame them. Previous versions were well-received and didn't offer any obvious room for improvements. If you're already in possession of an older Arctis 7 or above, you needn't worry about your hardware being outmoded by this release, such is the subtlety of improvement. If you've been pressing your face against the proverbial shop window for a while now though, this is definitely the time to invest in PC gaming's go-to wireless headset.