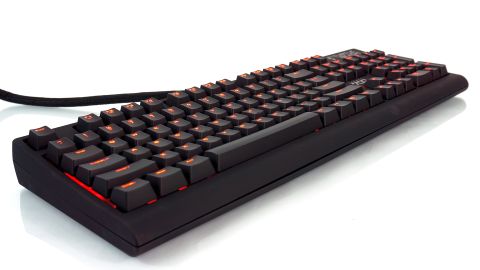 As a 104-key device, it’s no surprise that the Impact 700 has a little more in the bezel department than the compact TKL Impact 500. Indeed, there's slightly more chassis protruding from the front, back and sides of the former, although it's still minimal enough that you won't be resting any part of your hands on it.

Like its sibling, the Impact 700 has a bowl design, with the keys set inside the chassis somewhat, and there's a steel backplate underneath that has a "gunmetal" finish. Unlike the simpler Impact 500, this keyboard offers two USB 2.0 and two 3.5 mm audio passthrough ports. Because the passthrough ports require thicker cabling, the Impact 700's braided cable is not removable.

The passthrough ports are located on the rear of the chassis, on the right side. This keeps the ports themselves neatly out of sight. My sole complaint (and it's a small one) is that when I plug in a headset here, the cable is in the way. You have to drape it across the keyboard, route it around the right side (where it's in the way of your mouse), or run it along the back of the keyboard and around the left (which leaves you little slack to work with).

I would by no means categorize the key caps as "soft touch," but they are softer and smoother than those on the Impact 500, and they complement the look of the rubberized soft finish of the chassis nicely. The keys are all LED-backlit, although the only color you get is red.

In an effort to smooth out the lighting, Turtle Beach used a glittering, silver-colored backplate. For the most part, it does indeed seem to help nicely distribute the light--but only in the middle keys. If you look closely, the red light doesn't extend all the way to the edges, and you instead see the silver color of the backplate. Perhaps a red-colored backplate would serve the purpose slightly better.

One thing to note about the key cap lettering is that the secondary functions on the F keys and number keys  have tiny lettering. It's almost impossible to see at a glance which one does what. On one hand, this is annoying. On the other hand, it's not exactly difficult to remember which secondary characters are on the numbers, and you can easily enough memorize the media and lighting controls on the F keys.

From left to right, starting with F1, they are: back, play/pause, stop, forward, volume up, volume down and mute. Using F11, you can turn off all the lighting, or you can leave on just WASD and directional keys, or just the WASD and number keys (1-6). F12 cycles through the various lighting options, which consists of three levels of brightness, a breathing effect, and a pulsing effect.

When the lights are all off, the Impact 700 looks downright cool. The lettering is laser etched, so it's not bright white, and when there's no backlighting, the overall look is as all-black as you can get and still read the key cap letters. (The silver backplate peeks through a little, too.)

Speaking of key caps, the Impact 700 comes with 11 replacements and a key puller. Points for Turtle Beach for having a sense of humor: The extra caps include "NoCtrl," "InCtrl" and "WrathLk," as well as "GG" as a substitute Esc key.