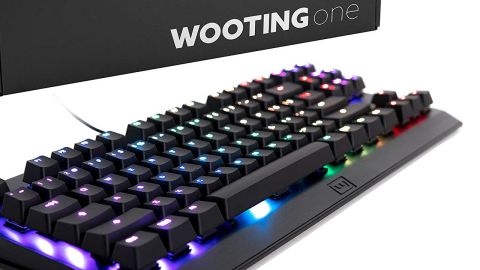 Packed with possibilities and pulled off with panache, the Wooting One is a compact keyboard that stands alone, thanks to its analog switches and customizable actuation point.

While Kickstarter catches a lot of headlines and puts a lot of products in the public eye there aren’t a huge number of crowd funding success stories out there. The Wooting One, an optical analog keyboard cooked up by a trio of Dutch innovators and funded far in advance of its goal by excited backers, bucked that trend, not only by exceeding its required levels of investment but by fulfilling its unusual promise. It’s a wonder of engineering, its gimmick really works, and it’s one heck of a keyboard with it.

The Wooting One is many things, but it certainly isn’t cheap. Its asking price of $140 (£129.99), either through the Wooting website or via retailers like Amazon and Newegg, places it firmly at the higher end of the mechanical keyboard market, particularly given that it has a tenkeyless form factor.

If that’s a deal breaker you’ll want to hold on for the full-size version, the appropriately named Wooting Two, which has also passed its funding goal on Kickstarter. At the time of writing the second edition is up for preorder on Wooting’s website at $149.99 (around £139). It’s due for release in mid-June with a ten dollar price hike once it leaves preorder.

There are extras available too; you can replace the Flaretech optical mechanical keyswitches, apparently rated for 100 million presses each, for $49 (£38) per pack of 110, or get a smaller pack of 15 ($15/£12) if you just want to customize a small area.

It’s the Wooting One’s primary gimmick, so let’s answer the big question right off the bat: just what is an analog keyboard? In this case at least, it’s a keyboard which does away with traditional switches and replaces them with a mainboard covered in optical sensors. Each of these, one for each key, fires directly upwards and senses distance – that usually means they’re looking at the space between the sensor and the base of the Wooting One’s Flaretech switches, available in 55cN linear, 55cN clicky, or the heavyweight 80cN linear variety. But the sensors can also be fired if you remove a switch and hover your finger over what would be its actuation point. The keyswitches have absolutely no electronic components, and don’t interact with the rest of the hardware directly.

Wooting packs those sensors into one of the more handsome and understated keyboard packages we’ve seen. Shunning harsh diagonals (beyond its sloping chin) and flashy features for a raw and weighty black body with only as many keys as it absolutely needs, this feels just as at home on an office desk as it is beneath an ultrawide gaming monitor. It’s built to last; the aluminium-topped base is strong and solid, the braided detachable micro-USB cable snakes through tight grooves on the underside, and since its switches don’t actively interact with the main electronic hardware (instead hovering slightly above it) they’re easy to replace and basically impervious to everything but occasional (and easily fixed) dust ingress. We’d put money on this outlasting just about any keyboard where typing puts even microscopic stresses on the mainboard.

Analog or not, the Wooting One is one of the finest keyboards out there in terms of feel and sound. We tested the 55cN linear version and, even given our general lean towards the more tactile end of the keyswitch market, it impressed from start to finish. The keys are just stiff enough, they bottom out with an impressive clatter, and the spacing and form of the keycaps means they’re more than easy to type on.

The optical analog nature of the switches means you can set the actuation point exactly at the level that suits you. Type light? Bring it high. Prefer to bash those keys hard? Put it a little lower. We’re not entirely sure how this change would jibe with the clicky version of the key (presumably it would be a little odd if you set it to trigger above the bump) but it’s an incredible feature to have available and, if we’re honest, it’s the element of the analog switches that you’ll use the most.

Some might bemoan the lack of a number pad, and that’s fine: you can wait for the Wooting two. Complaining that a tenkeyless board lacks tenkeys seems a little churlish. We didn’t even miss the lack of dedicated media controls; this is so cool, so clean, it almost feels as if adding them would have ruined the Wooting One’s whole vibe. There’s an Fn key mounted beside the right control key that fires up media keys in the upper navigation cluster, and that’s good enough. Extra points for not tying volume controls to the F-keys.

What do you want your keys to do? Straight trigger? Done. Analog input? Well, yes. Two individual functions on one key, depending on how far down that key is pressed? Sure. Why not. It’s an almost bewilderingly versatile keyboard in terms of its options, and while we wouldn’t necessarily apply it to every single game, having the equivalent of an Xbox’s analog trigger on every single key means you can approach a lot of games very differently.

Testing the Wooting One with GRID Autosport didn’t, admittedly, make us any better at the game. That would require skill. But soft keypresses translating into subtle adjustable movements is a completely different experience from playing on a standard keyboard, and one our fingers weren’t entirely ready for given that analog controls are usually the domain of the thumbs. Smoothly accelerating with W, feathering the brake with S, and leaning into turns with half-presses of A and D makes precision racing games at least playable on the keyboard. We wouldn’t necessarily apply it to FPS games, since there’s rarely a reason not to sprint around at full speed, but we did try the original Dishonored and found part-presses just delightful when sneaking about.

That said, while the flexibility is there, not everything is going to work with the Wooting One – if a game doesn’t play nicely with the Steam Controller or specifically offer gamepad and mouse input at the same time, it can fight against the One’s Xinput/Directinput controller modes. Every new game you play also means spending some time either finding an already created keyboard profile or mapping the keys to your liking in the Wootility app, followed by the requisite fight through the control setup of your chosen game; it’s quick enough to dig up a profile you’ve already installed, but that doesn’t make the initial setup process any less long winded.

You can, thankfully, flip between analog and digital modes using the One’s ‘Mode’ key, which replaces Scroll Lock; when you have they keys set as analog triggers, this is essential.

Though the One has been around for a couple of years now, it has not been left to rot. The company is consistently adding new features through the recently redesigned Wootility app, which is a neat and utterly straightforward customization tool. It gives you access to your digital profile and a set of four analog profiles, each of which can be individually tweaked not only in terms of control mapping but in terms of actuation depth – whole board only, unfortunately, not per-key – right down to the particular analog curve you’d like to set to actuation.

Wooting has also recently added what it calls Tachyon mode, activated with a single switch, which drops input depth customization and RGB modes in favour of a response time below 1 millisecond.

Lighting is similarly easy to customize, with full per-key RGB options and a host of lighting modes that you literally won’t find anywhere else: AOE, for example, produces a lighting burst around the key depending on how hard it’s pressed; Jelly does the same but over a larger area of the keyboard, and touch mode utilizes the F-row as a rising bar to indicate how hard you’re pressing the keys. It’s all very pretty, and the otherwise stark black makeup of the case makes its colors really pop.

As we said at the beginning, the Wooting One is an excellent keyboard. It’s solidly built, highly customizable, gloriously gaudy (or utterly subdued, if that’s your choice) and its analog features, while sometimes a little awkward to set up, are brilliantly executed. Even if you never use them, this product is  tremendous to type on.

You may need to keep a can of compressed air around – we noted, over the extended time we spent with the board, that dust can make its sensors occasionally unresponsive. It’s possible to disassemble the whole board and literally wash the mainboard should dirt make its way onto the sensors, a testament to the modularity and sharp thinking that’s been put into the Wooting One.

It is not a keyboard for everyone. There are solid typers out there for half the price – Corsair’s tenkeyless K63, for example – which will do the job just fine. And if you’re a real keyswitch enthusiast, it probably doesn’t matter how customizable the Wooting One is: you’re heading to the dark and dirty world of custom mechanical keyboards. That’s fine, you do you, but it doesn’t make the Wooting One any less clean and cool.