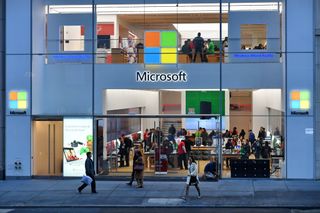 Microsoft is closing all of its physical stores both in the U.S. and globally, the company announced today. That comes in a "strategic change" to retail, which will focus primarily on digital stores.

Four of the major stores: London, New York City (Fifth Ave.), Sydney and one on its Redmond, Wash. campus will serve as Microsoft Experience Centers that don't actually sell any products.

The company claims that its digital stores, including Microsoft.com and those built into Xbox and Windows, reach 1.2 billion people each month in 190 different markets.

Employees at those stores will be moved to digital roles.

"Our sales have grown online as our product portfolio has evolved to largely digital offerings, and our talented team has proven success serving customers beyond any physical location,” Microsoft corporate vice president David Porter said in a statement. "We are grateful to our Microsoft Store customers and we look forward to continuing to serve them online and with our retail sales team at Microsoft corporate locations."

There will be new services offered online, including one-on-one video chat with support associates, virtual workshops and video tutorials.

Microsoft first started opening retail locations in 2009, showcasing its own Surface devices, Xbox as well as Windows PCs from third-party OEMs. It served as an area for customer service and repair (an area Apple excels in with its Genius Bars) and often held events.

Microsoft had not yet re-opened any stores that were closed due to the COVID-19 pandemic. Apple, which had slowly started reopening stores, chose to re-close some of them in the United States due to increasing numbers of cases.