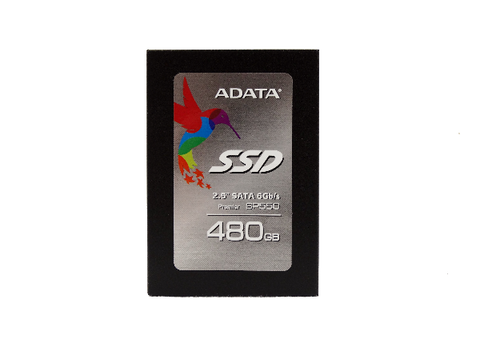 We have all three Adata SP550 capacities in-house. The initial release takes this line-up to 480GB, with a 960GB model expected in the future.

This packaging is several years old, dating back to Adata's first hummingbird logo design. It was introduced alongside the first SandForce-based SATA 3Gb/s drives.

The front of the box lists several product features as well as the three-year warranty. On the back is four-corner performance data for all three capacities.

Inside, we see the SSD, a 7mm-to-9.5mm adapter and a quick-start guide. The paper manual includes installation instructions and a link to download Acronis True Image HD.

The Adata SP550 uses a 7mm chassis, so it'll fit in newer Ultrabooks requiring a lower-profile enclosure. Overall, the SP550 is fairly vanilla-looking, though at the same time functional.

Opening each drive up, we find the new Silicon Motion SM2256 controller paired with Samsung DRAM and the first triple-level-cell SK Hynix flash we've ever seen. Our performance charts include the Longsys Foresee S500 with the same SM2256 controller; however, it's matched up to Toshiba's A19 TLC. It will be interesting to compare both platforms and determine if Adata chose the better flash vendor.

Silicon Motion's SM2256 doesn't employ compression, so there isn't a penalty for hitting the drive with incompressible data.

As mentioned, to combat low write performance, manufacturers often set aside a portion of the high-density TLC, turning it into emulated SLC flash. This yields a 3x reduction in capacity for those cells, but a 4x increase in performance. As you might imagine, there's a balance to be struck between too much space dedicated to SLC, eating up capacity, and avoiding the TLC write penalty. As you can see on the above graph, Adata's SP550 only gets a small does of SLC, so you'll probably experience low sequential write speeds during file transfers or software installs.

Prev Page Specifications, Pricing, Warranty & Accessories Next Page Four-Corner Performance Testing
5 Comments Comment from the forums
Be In the Know