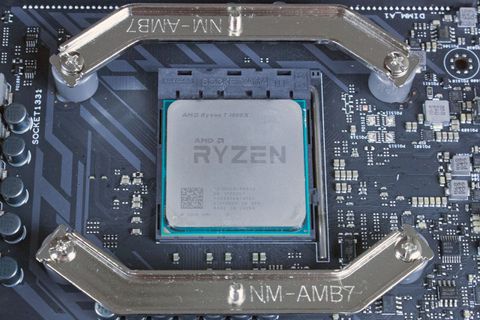 It takes more than 18 hours to run the office, workstation and HPC (High Performance Computing) benchmarks once. Consequently, we limited our tests to a total of four CPUs and two runs each (i.e., at stock clock frequency and at 3.8GHz). We used Microsoft Windows’ performance profile for all of the tests. AMD’s older generation is represented by the 5GH FX-9590, which necessitates water cooling.

We get going with a good old friend: the GDI/GDI+ benchmark. We decided to start with it, because its results will provide context for what’s to come later. This benchmark is used to test two different ways to output 2D objects. These are primarily found in older applications, print output, and, in a modified form, in today’s GUI display. We’re using an Nvidia Quadro P6000, since it represents the best available graphics performance that money can buy. This means that there’s no GPU bottleneck to worry about whatsoever.

We start with directly drawing to an output device. The graphics driver uses the CPU quite heavily for this task, but, for the most part, doesn’t use that many threads. This is due to the demise of true 2D hardware acceleration with the introduction of the unified shader architecture. The Microsoft Windows driver model’s also not exactly conducive to it. It’s interesting to see that, in spite of all of this, AMD’s new Ryzen 7 1800X manages to beat Intel’s Core i7-6900K. Since each individual action has to make its way through the entire system, these results aren’t just representative of processor performance, but also include chipset performance.

Next, we add a memory task by using the single 2D function that’s still hardware-based: copying the graphics output from the place in memory where it was built to the output device. We’re executing the exact same steps, but draw a virtual bitmap and not on the monitor. Only the completed picture is sent to the output device. The result is that the CPU load increases significantly, which, in turn, has a surprisingly large impact on the benchmark results. Without the rest of the system providing a bottleneck, the older FX-9590 manages to beat AMD’s new offerings. Only if its clock frequency is lowered to 3.8GHz does it have to admit defeat. The same goes for Intel’s Core i7-6900K.

Update (this is in reference to some reader questions about these results): Drawing into DIB is a pure 2D workload, and the stock i7-6900K can't reach its highest possible clock rate in this low-priority multi-threaded workload. To be specific, the i7-6900K spreads the workload over its 16 threads, so the processor runs at close-to-idle clock speed, because it only utilizes 20% of many of its cores. The distributed workload also strips the processor of its Turbo Boost capabilities.

By comparison, the -7700K spreads the workload among half the threads, which yields a higher load per core, thus boosting its clock speed. The -6900K at 3.8GHz also experiences a boost because it has 50% more clock speed than its stock configuration.

This test further implies that AMD is able to transition between power states faster than the Intel processors, which means it is tuned well for light workloads.

These findings are of great significance for AutoCAD, which we get to on the next page. Ultimately, AutoCAD draws all of its output in memory first, and then sends it to the monitor.

Adobe’s Creative Cloud makes for an exemplary benchmark, and it certainly makes more sense to use a real-world application than a synthetic benchmark. It tests both single- and multicore performance.

AMD’s Ryzen 7 1800X can live up to its full potential with our Handbrake benchmark. No matter what the quality is set to, AMD’s new processor just crunches away.

This application sits right on the boundary to the workstation space, and thus leads us seamlessly to the next page. Apart from the visual task library (e.g., graphically complex charts), which pose problems due to the usual reasons (i.e., difficulties with parallelization), the scientific and engineering fields are where AMD’s Ryzen 7 1800X shines.

Ryzen’s a well-suited CPU for both developers and users due to the fact that many libraries don’t provide an explicit advantage for Intel processors.

With Ryzen, AMD has produced a processor that’s competitive in many application areas. It certainly doesn’t have to hide from Intel’s current octa-core offerings. The price/performance ratio makes it an interesting choice for commercial applications, unless the application in question specifically demands an Intel CPU.