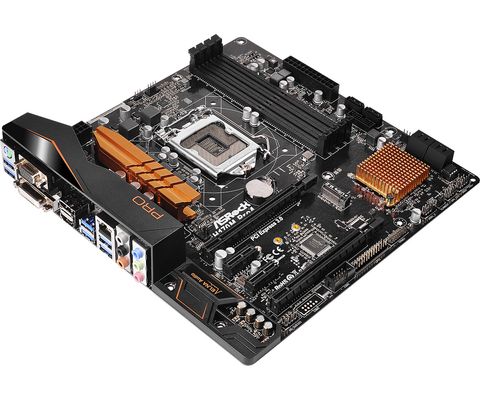 MSI's H170I PRO AC is the only mini-ITX board in today's round-up. Like all such tiny boards, it makes a few compromises in some areas, but I also found some positive features that stand out. For example, this is the only board in the round-up with Wi-Fi connectivity, and it has some interesting diagnostic LEDs on the board.

In the box, you get the board, a pair of SATA cables and a pair of antennas for the wireless radio. You'll also find the usual I/O plate and driver CD, along with a glue-bound, 5-15/16-inch x 4-inch manual that will not lie flat and is somewhat difficult to read due to tiny type. The various languages are not well-labeled or called out in a table of contents. However, in addition to English, I recognize French, German and Russian; plus, there are four pictographic Asian languages.

The audio codec is an ALC887, which offers a 97dB S/N on the output and 90dB S/N on the input. It isn't pro-quality, but is fine for most users who are not audiophiles.

The layout is a little cramped, as you would expect on a mini-ITX board. Most of the placements are intuitive, but a couple of them are not. The front-panel audio connector is located to the left of the audio jacks. The USB2.0 and COM headers are between the network and USB connectors, so a front-panel USB2.0 cable will run across the board. The radio is pre-mounted right in front of the antenna connectors, so their connecting wires are short and won't get in the way as you install this board. The CPU power connector requires only four pins, and is well-placed with finger space around it on the right edge in front of the rear mounting hole. Both fan headers are on the right edge well behind the two DDR4 DIMM slot latches. There are no latches on the left side.

The PCIe slot is reinforced by thick, plastic ridges on the outside edge, and its metal mounting pins (not just the electrical connectors) are soldered to the board; well, one is, but my sample appears to be missing the pad that would have allowed the other to hold any solder. In any case, MSI says these features are to protect the slot against accidental damage from heavy graphics cards. The M.2 slot is located on the underside of the board, so if you're going to use this slot, mount the M.2 drive before mounting the board. Looking at the QVL, this slot appears to take PCIe-based M.2 drives, but not SATA-based, so choose your drive carefully.

The MSI UEFI is straightforward. Here is the main screen, along with one showing current status:

Once again, since H170 is not an overclocking chipset, the following screens provide few actually configurable options, despite using a K-series CPU: