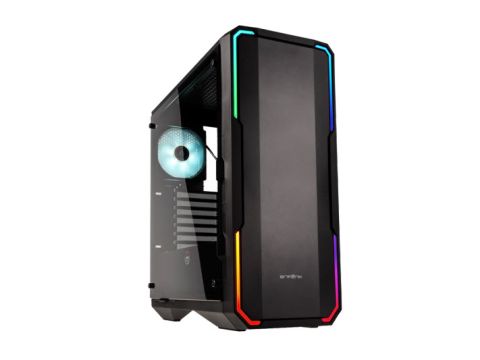 There is a small plastic bag containing various screws, motherboard stand-offs, and zip ties located in one of the open 3.5” drive bays. A 10-page quick installation guide sits in the PSU compartment.

The interior of the Bitfenix Enso measures roughly 395mm deep and 330mm high. There are no internal 5.25” drive bays in the main component compartment. The company claims motherboard support up to E-ATX, but in reality the Enso only supports motherboards up to 10.6” deep.

Seven expansion slots make it possible to install up to three graphics cards in SLI and/or CrossFire. This case supports graphics cards up to 340mm in length. Those with plans to mount an all-in-one cooler in the front of this chassis could run into space constraints depending on the size and thickness of fans and radiator.

There are a total of seven fan mounting locations in the Bitfenix Enso. The chassis ships with a single 120mm intake fan in the front as well as a 120mm exhaust fan over the CPU socket area. The two installed fans are placed almost parallel to each other providing better than expected airflow. But airflow still suffers because of fan size. Mild builds should be fine, but overclocked systems with multiple graphics cards will definitely call for more fans or larger 140mm intake fans.

Although Bitfenix lists support for power supplies up to 150mm in length, we found this to be a conservative number, as we were able to install a 200mm modular PSU, although it was a tight fit. The Enso can be equipped with coolers as tall as 160mm and can accommodate multiple graphics cards up to 340mm in length.

Radiators and all-in-one coolers can be mounted in the front and rear of this chassis. The mounting locations in the front support radiators and all-in-one liquid coolers up to 280mm. As with many mid-tower ATX chassis, even though you can physically mount most all-in-one coolers in the front, because of the fixed length of the tubing, some coolers might not be able to reach the CPU socket. Despite that limitation, these locations are ideal for mounting radiators for water-cooled graphics cards. The exhaust fan mounting location can be fitted with 120mm coolers in single and dual fan configurations.

Fans of “all things RGB” will be pleased to know this chassis has integrated lighting on the front of fascia as well as an extra header behind the motherboard tray for RGB lighting strips and accessories.