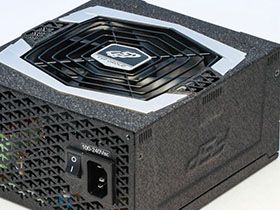 The FSP Aurum 92+ is high-quality, high-efficiency, low-power, semi-modular 650W PSU. While this power supply performs within its 80 Plus Platinum spec, the 12V rail's maximum power output is under 600W, and the rather loud fan runs continuously.

We haven't seen an FSP power supply in the lab for quite a while. It was a stroke of good luck, then, when the company sent in a high-efficiency product with a reasonable output level in time for a comparison against two similar competitors. We already published the first evaluation in Corsair HX750i 80 PLUS Platinum Power Supply Review, and that solution proved compelling. As fans of FSP's 80 PLUS Gold-rated Aurum models, we're interested to see how the Platinum-class Aurum sizes up.

Its enclosure differs in one small way from the Gold-class Aurum: the fan’s frame is not golden colored, but rather silver, hinting at the PSU's 80 PLUS Platinum rating. FSP's workmanship is otherwise perfect; the roughened finish gives the PSU an upscale look.

While the ATX, CPU and PCIe cables are all sleeved, round and fixed, the others are modular and flat. There exists an exception: one SATA cable is round, and for some reason its four connectors are only spaced 2” apart. The other SATA cable sports five connectors, which are spaced 6” apart. At first, that seems like an illogical discrepancy. But it actually makes a lot of sense. Regardless of whether you pick a large or small case, storage connectivity will be readily available. The cable lengths and number of connectors impressed us; for instance, there are four auxiliary PCIe outputs for a couple of high-end graphics cards.

FSP's solution employs four +12V rails, each of which is rated for 18A. The maximum combined load is 576W. That's not a lot for a 650W power supply, unfortunately.

The 80 PLUS Platinum category sets a high bar for efficiency. And like Corsair's model, the FSP Aurum 92+ struggles somewhat. While it easily satisfies the specification’s requirements at 20 and 50% load, efficiency at 100% duty cycle is only 88.34% (instead of the required 90%). Similar to the Corsair review, though, we're letting this slide. A miss by 0.66% is not catastrophic, and so few of us peg our PSUs at 100% anyway. Lower loads are more common, and that's where the Aurum 92+ shines. At 50W, its efficiency is still a commendable 86.3%.

While the ripple and noise measurements comply with the specification, the scope’s display reveals more spikes than we'd like. In particular, ripple voltage on the 5V rail is quite high, though still less than the permitted 50mV.

Thanks to strong results in our testing suite, the Aurum 92+ looks like a winner. We're not fretting about the slight efficiency miss at full load. However, we're disappointed in this PSU’s sound level. Its fan is permanently on, and even with a 50W load it generates 34.5 dB(A). Although that doesn't go up much at 600W, FSP's PT-650 is simply not a good choice for a living room PC.

A look into the PSU’s enclosure reveals quite a bit of spare room that could have been used for cooling fins. Maybe this is why the Aurum 92+ doesn't have hybrid fan control. While the PT-650's circuit design does not reflect the industry's most recent improvements, its ACRF (Active Clamp Reset Forward) design is no slouch, partly thanks to the secondary side's synchronous rectifier. The two-stage input filter even sports a MOV – a first for FSP, as the Gold-rated Aurum models don’t sport MOVs. All capacitors are sourced from Nippon Chemi-Con in Japan. The soldering quality is excellent, but perhaps FSP could have added a few more heat-shrink tubes.

FSP's Aurum 92+ is the oldest and least powerful model in our ongoing three-way comparison. But this 650W PSU is not an underdog, and its excellent workmanship and well-rounded feature set are good indicators of why. Partially modular cabling is not a detriment; to the contrary, it actually helps improve efficiency. The Aurum 92+'s strength is most evident at low power levels. Of course, that's aided by a relatively low maximum output.

So, what are its weaknesses? We don't like the low maximum power on the +12V rails, nor do we enjoy the PSU’s fan that runs continuously (and not altogether quietly). If you don't find yourself needing all of this supply's output (or a quiet fan), the Aurum 92+ could be a viable option. Just be aware that its warranty period is five years.