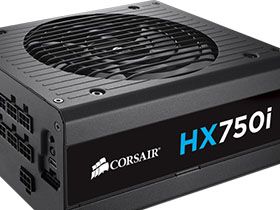 Corsair's HX750i is the company's "entry-level" 80 PLUS Platinum PSU. Despite the solder quality of the auxiliary PCB being so-so, this power supply lives up to Corsair's reputation for quality. The HX750i's fully modular cabling, configurable single- and multi-rail options and silent operation are among the premium features that can sway builders towards this PSU.

Technically, the efficiency of a PSU is unrelated to its wattage. Some of the most powerful PSUs sport the best efficiency, though. Then again, few people truly need 1000W or more, and even fewer are willing to pay a premium for output levels they have no use for.

Also consider the fact that when you under-utilize a high-output PSU, you operate it at a power level where its efficiency is less than the advertised number. Thus, what you really need is a lower-wattage PSU - and there's a good chance that power supply is going to be adorned by an 80 PLUS Gold rating or lower. Even in the mid-range of the wattage spectrum, Platinum-class products are scarce.

Recently, Corsair introduced its Platinum family, and the entry-level model boasts a "mere" 750W sustained ceiling. Its launch inspired us to start comparing mid-range power supplies, so you'll see more of those in the days to come.

The "i" in Corsair's model name indicates that the HX750i supports Corsair Link Digital, meaning it can be monitored and, to a certain extent, even controlled by PC software. That feature and the Platinum rating are two of the most significant improvements over the HX750i's predecessor.

The entry-level model's look and feel are excellent. It's a well-built PSU with nicely chamfered edges. All of the cables are modular and flat, which can improve routing and airflow. You get access to two CPU cables, six 6+2 auxiliary connectors, 12 SATA plugs, eight Molex connectors and two floppy drive plugs. All of the cable lengths are generous except, perhaps, the SATA cables, which we prefer to be longer than the 33.5” we measured. At least you have 12 of them, qualifying the HX750i for use in a storage server.

Corsair's spec sheet mentions a single +12V rail able to deliver up to 62.5A. But for system builders who prefer multi-rail supplies, you can configure the PSU to operate that way via Corsair's software (for our testing, we stuck with a single-rail arrangement). Since 62.5A * 12V equals 750W, 100% of the PSU’s nominal power can be drawn from the 12V rail.

A seven-year warranty exceeds the industry average and may be the deciding factor for enthusiasts on the fence, faced with many compelling options.

So far, the Corsair PSU looks promising. But it still has to pass a series of stringent tests in our lab. Let’s recap the requirements of the 80 PLUS organization. A Platinum-grade PSU is required to achieve the following efficiency percentages at 110V: 90% efficiency at 20% load, 92% at 50% load and 89% at full load.

At low and high loads, the HX750i easily satisfies those efficiency requirements. However, at medium load, it runs into a minor issue. We calculated an efficiency of 91.96%, which is 0.04% less than the requirement. Then again, that's very close to 92%, and we're going to give it the benefit of the doubt. A second sample could show up on the other side of the cut-off. At very low loads, the HX750i’s efficiency gets worse, which is no big surprise in and of itself. But the other two PSUs we're working on do sport better numbers.

Corsair's ripple and noise values are exemplary. Further indications of this PSU’s quality are its low inrush current and long hold-up time.

Documentation claims that the HX750i PSU features "virtually silent" operation, meaning automatic, hybrid fan control. In other words, the fan only starts once a certain load or temperature is exceeded. Corsair says that under 300W, the PSU doesn't need its fan. And we found this claim to be true. When we ran at 40 and 200W loads, the HX750i was completely silent. When the fan does spin up, its sound level is quite subdued; 29.5 dB(A) is barely audible, even in quiet environments.

As we've come to expect Corsair has the HX750i built at CWT (Channel Well Technology), a contract manufacturer renowned for high quality. The input filter is split into two stages and sports a total of six Y capacitors, two X capacitors, two coils and a bridge. Like the electrolytic capacitors on the secondary side, the primary capacitor is made by Nippon Chemi-Con. The secondary-side polymer capacitors are manufactured by Apaq and Enesol. The soldering quality of the main PCB is top notch, while the soldering quality of the auxiliary PCBs is good (though not perfect).

In the days to come, you'll see Corsair’s HX750i challenge two somewhat dated models from FSP and SeaSonic. Is the fight fair? We think so. After all, the three candidates are 80 PLUS Platinum-rated according to their spec sheets, and they offer comparable outputs.

The inspiration for our test, Corsair's HX750i, does manage to impress right out of the gate. Its manufacturing quality is among the best we've seen, inside and out, and its feature set is richest amongst the trio of ultra-efficient PSUs in our line-up. The two other models simply don’t offer as many connectors, nor do they include software-based monitoring and configuration. Our lab tests doesn't uncover any obvious flaws aside from a less-than-perfect efficiency measurement at 50% load. This is a fairly minor issue exhibited by all three contenders. Corsair's HX750i also does its business quietly, and in many cases even silently. As such, it earns a first-place finish, though it shares the honor with another PSU. You'll have to keep coming back to learn which other one excels.